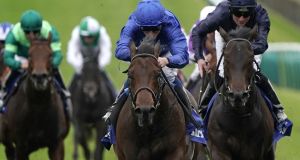 Aidan O’Brien is the most successful trainer in Qipco 2,000 Guineas history, but another record could be within his grasp in the first English Classic of the season at Newmarket on Saturday.

The impact of the coronavirus emergency means the mile Classic will take place a month late and behind closed doors. Once again though O’Brien is set to be a big player.

They are rated among the biggest threats to the general odds-on favourite and a win for either would give O’Brien a four-in-a-row seen just once before in the more than 200-year history of the race.English trainer James Edwards managed the feat between 1834 and 1837.

Royal Dornoch and New World Tapestry are two other Ballydoyle hopefuls among a 15-strong Guineas entry once again dominated by racing’s major operations.

As well as Coolmore and Godolphin being represented in depth, Qatar Racing’s Kameko is another major contender.

Bookmakers reckon it is the Ralph Beckett-trained Kinross that could be best placed to spike the big guns and jockey Harry Bentley suspects they may be right.

The impressive maiden winner could finish only fifth to Kameko in his only other start at two in the Futurity run at Newcastle on the all-weather.

“At Newcastle he got a big bump off one of the Aidan O’Brien horses and I don’t think people realised how much of a bump it was. That didn’t help us trying to get in the right rhythm,” said Bentley on Tuesday.

“He didn’t get a clear run at a crucial stage and I’m not saying he would have won, but he would have been closer. You have to remember that was only his second run . . . the likes of Kameko were more battle-hardened than he was.”

Kinross is a general 12-1 fourth favourite behind the odds-on Pinatubo who finished 2019 as the highest rated two-year-old champion in quarter of a century.

“I know Pinatubo is clearly an exceptional talent but we are all having our first run of the season as three-year-olds and anything can happen from two to three. We don’t know if he still has that definite advantage or if we have made up the gap. All I can say is that I’m very happy with Kinross,” said Bentley.

The first Group One of the revamped season in England will be Friday’s Hurworth Bloodstock Coronation Cup which has been switched to Newmarket and features last year’s Derby hero Anthony Van Dyck.

Not since Roberto in 1973 has the previous year’s Derby winner landed the Coronation Cup.

The race will feature a hark back to the past as among Anthony Van Dyck’s opposition will be the outstanding dual-Ascot Gold Cup winner Stradivarius. Topping the betting though is Godolphin’s wide-margin German Group One winner Ghaiyyath.

1 Serpentine stays on from the front to steal Epsom Derby for Aidan O’Brien
2 Monica Seles: The warrior queen who could have been the best ever
3 Eamon O’Shea: We spent quite a bit of time talking about older people rather than to them
4 Love tears them apart in stunning Epsom Oaks romp
5 Glorious Greenwood as Man United thrash Bournemouth
Real news has value SUBSCRIBE

Chelsea make light work of Watford to move back up to fourth 22:18
Arsenal check Wolves to relight their European fire 19:41
Leeds move four clear as Brentford add to Wigan woes 18:07
Jamie Vardy reaches his century to get Leicester back on track 17:38
Glorious Greenwood as Man United thrash Bournemouth 17:28
Here is your handy guide to sport on television this week