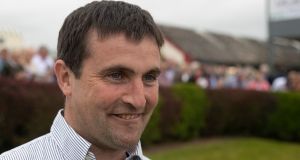 Trainer Aidan Fogarty will run Forever In Dreams when racing resumes behind closed doors at Naas next Monday.

Forever In Dreams is one of the star names among a total of 236 entries for Monday’s meeting at Naas, which signals the resumption of racing in Ireland.

No racing has taken place since Clonmel on March 24th due to the coronavirus pandemic, but the sport will make a high-profile return with two Listed races on Monday ahead of the Irish Guineas meeting later in the week.

The Aidan Fogarty-trained Forever In Dreams leads the way in the Anglesey Lodge Equine Woodlands Stakes after twice placing in Group One company in 2019.

She is a general 20-1 chance for the Diamond Jubilee Stakes at Royal Ascot and is one of 14 entries for this Listed heat along with King’s Stand hopeful Sceptical and Joseph O’Brien’s pair of No Needs Never and Speak In Colours.

The Listed Kuroshio At Compas Committed Stakes (23 runners) is limited to three-year-olds with Commonwealth Cup fancy Lope Y Fernandes one of three for Aidan O’Brien along with Pistoletto and Southern Hills.

More Beautiful, a War Front half-sister to Saxon Warrior, is one of 27 entered for the opening Irish Stallion Farms EBF Fillies’ Maiden for two-year-olds, while the colts equivalent has drawn 28 contenders including Battleground, who is the first foal of Arc winner Found.

The three-year-old maidens over a mile have proved popular with 46 in the fillies’ heat and 48 in the colts’ version, but the six-furlong Clinton Higgins Accountants Handicap has drawn most interest with 50 contenders.

Meanwhile, Pinatubo will face 14 rivals as he goes for Classic gold in Saturday’s Qipco 2000 Guineas at Newmarket.

Charlie Appleby’s colt was unbeaten in six starts last year and ended the campaign with a rating of 128, the highest mark awarded to a juvenile since Celtic Swing in 1994.

Pinatubo’s unbeaten run included a nine-length verdict in the National Stakes and victory in the Dewhurst Stakes on his final start in 2019.

Arizona finished two lengths behind Pinatubo at Newmarket and he reopposes for Aidan O’Brien.

Ryan Moore will ride the No Nay Never colt while Frankie Dettori will be on O’Brien’s second string Wichita, who finished third in the Dewhurst.

O’Brien also fields New World Tapestry, who will be ridden by Adam Kirby, and the Tom Marquand-partnered Royal Dornoch.

Andrew Balding’s Kameko is a leading contender after winning the Vertem Futurity Trophy on his final outing last year and he is the mount of champion jockey Oisín Murphy.

Kenzai Warrior was unbeaten in two runs for Roger Teal, with the Richard Hannon-trained Mums Tipple looking to bounce back following a lacklustre effort in the Middle Park Stakes on his final outing last term.

Kinross was an eight-length novice winner last October before finishing fifth in the Vertem Futurity Trophy and he represents Ralph Beckett with Cepheus, Juan Elcano, Persuasion and Starcat completing the line-up.

1 Gordon D’Arcy: Losing such a big game shines a very harsh light on certain players
2 How Dundalk’s opponents Sheriff started on wrong side of the law
3 Luis Suarez leaves Barcelona for Atletico Madrid in €6m deal
4 Awarding of 2023 Rugby World Cup to France part of Laporte investigation
5 The Offload: Saracens prove Pro14 is not fit for purpose
Real news has value SUBSCRIBE