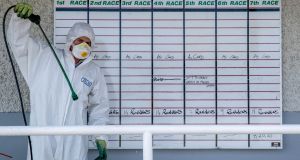 A member of the track staff at Naas Racecourse sprays disinfectant as preparations continue for the resumption of horse racing on Monday. Photograph: Morgan Treacy 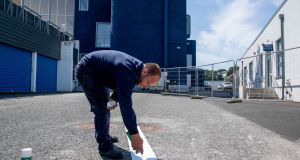 Racing authorities are seeking clarification from the Government about how its accelerated easing of coronavirus restrictions might allow some public attendance at tracks in time for the Galway Races summer festival.

After a 76-day absence due to the coronavirus pandemic, racing will resume behind closed doors at Naas on Monday.

It is the first major competitive sporting action to take place in Ireland since lockdown and kicks off a crammed and revamped programme that will quickly see classic action at the Curragh on Friday with the Tattersalls Irish 2,000 Guineas.

Naas hosts an eight-race card, and Horse Racing Ireland has underlined how its immediate priority is to see all health protocols carried out properly and ensure a safe environment at the track.

Measures will include temperature checks for everyone entering the course and strict enforcement of social-distancing rules for the essential personnel required to stage racing.

“Public health is the primary issue. It isn’t racing as we know it, but it’s a huge step in the right direction. We haven’t done this in 11 weeks, and it will be very different to what we finished up at in Clonmel [on March 24th].

“So the first challenge now is to execute our protocols safely and deliver racing in a safe fashion,” said HRI chief executive Brian Kavanagh on Sunday.

“The second issue is to look down the road to what racing will look like post-Covid, and we can start to address the idea of people attending race meetings again,” he added.

On Friday Taoiseach Leo Varadkar outlined how the government’s schedule to unlock the country has been accelerated; the final phase of easing restrictions will now occur on July 20th, three weeks earlier than originally planned.

The reopening document outlines how attendance at sports events will resume at that point but with restrictions on numbers.

The key question of just how restricted numbers will be is something HRI is seeking clarification on.

The seven-day Galway festival, one of the sport’s best attended fixtures, begins on July 27th.

In April it was announced it would take place behind closed doors after the Government announced mass gatherings of more than 5,000 people wouldn’t be permitted up to the end of August.

“We will look now for more detail on what the term ‘Attendance at sporting events will be permitted in phase four’ means. We need to understand in more detail what that involves,” Kavanagh said.

Daily crowds of up to 30,000 people traditionally attend in Galway.

Even if such levels don’t happen next month, officials privately hold out hopes that limited attendance at racecourses by the paying public could be allowed after July 20th.

Kavanagh wouldn’t comment on that but did say that owners who weren’t permitted to race behind closed doors would be the first priority in any potential easing of restrictions.

“I know a number of racetracks are looking at the how rather than the when people get back racing. It’s a complex issue.

“There are a whole load of different aspects we need to deal with in the coming weeks.

“The roadmap says attendance at sports events can resume on July 20th. Issues like that will take a huge amount of planning. But every business in the country is looking at those issues,” he said.

“You would assume there would be limits on numbers. You would assume you would reconfigure your layout within the stands. Everyone is looking in the same direction. But clearly the watchword is caution,” Kavanagh added.

Fears for the commercial outlook of some of Ireland’s 26 racecourses have been expressed due to the impact of the pandemic on sponsorship, attendances and reduced revenue from media rights.

The reopening of some betting shops in Ireland this week, and in the UK next week, is expected to help with that.

However, racing behind closed doors in the weeks ahead could have an impact on bigger tracks in particular.

But the immediate priority will be on resuming racing at Naas, where 140 declarations have been made.

A total of 18 runners are due to line up in the opening two-year-old maiden, due off at 2.55. They include the Aidan O’Brien-trained More Beautiful, a half-sister of the 2018 Guineas winner, Saxon Warrior.

The feature races are two Listed sprint events, including the Committed Stakes, which sees Summer Sands have a first start for Joseph O’Brien.

The three-year-old, formerly trained by Richard Fahey, was purchased for 625,000 Guineas after finishing third in last year’s Middle Park Stakes.

O’Brien has No Needs Never in the Woodlands Stakes, although Buffer Zone could help Ger Lyons and Colin Keane off to a quick start ahead of Siskin’s tilt at Friday’s Guineas.