No pane as glass shower greets return of Newmarket racing 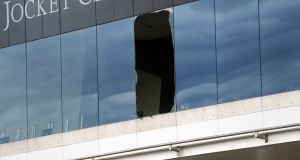 The window that fell out of the Champions Gallery at Newmarket Racecourse on Thursday. Officials believe it could have been caused by a chemical reaction. Photograph: David Davies/Getty Images

A chemical reaction within a pane of toughened glass is the suspected cause of a bizarre accident as horse racing returned to Newmarket. Seats in the grandstand were showered with glass shards when the pane burst suddenly about half an hour before the first race on Thursday.

Shocked officials were left counting their blessings that the sport is currently obliged to take place behind closed doors, as the area onto which the glass fell would be busy with spectators at that stage on a normal raceday. Instead, no one was hurt and the action continued at the track, known as the headquarters of flat racing, while specialists were called to the site to find an explanation.

“We need to do some more investigatory work, but the initial thinking is that it could have been a chemical reaction, causing the glass to combust,” said Amy Starkey, who manages Newmarket for its owners, the Jockey Club.

“Works to the other panels in the structure may be required. In the meantime, no one needs to have access to that area while we are racing behind closed doors.”

The section of windows involved in the accident has been in place since Newmarket’s Millennium stand was built 20 years ago at a reported cost of £16 million. Thursday was the first day’s racing at the track since November.

Starkey and her colleagues will be hoping for a smoother run as the ITV cameras arrive on Friday to cover three days of top-class action at the track, starting with the Coronation Cup. That race’s presence on this card is another reminder of the changes forced by coronavirus, as it would normally be part of the Derby meeting at Epsom.

Among those having to adapt to unusual circumstances is Ryan Moore, who, as first jockey to Aidan O’Brien, would normally be clocking up plenty of air miles over the Irish Sea at this time of year. Instead, travel restrictions mean there have been no visits to the Ballydoyle stable; the jockey will remain in the UK for the foreseeable future and O’Brien will not be present in Newmarket to give any last-minute advice in the paddock before Anthony Van Dyck lines up in the Coronation Cup.

Moore was unfazed as he discussed the situation on Thursday night. “All that stuff changes from year to year,” he said. “There’s been plenty of years when I haven’t sat on horses before I’ve ridden them in big races for Aidan.

“Anthony’s a lovely horse, obviously, he’s a Derby winner. He won the Lingfield Derby Trial, so he started well last year. Hopefully he can come back in the sort of shape he was in at this time last year.”

Moore believes that rain-softened ground was against Anthony Van Dyck when he flopped in the King George, and the rest of his form last year was at least respectable, bar a poor end-of-term effort in Hong Kong. Taking on Ghaiyyath and Stradivarius is a tough way to start the year, however.

On Saturday, Moore will be aboard Arizona, trying to turn around last year’s form with the unbeaten Pinatubo in the 2,000 Guineas. “He’s a beautiful horse,” the jockey says. “He won the Coventry last year and ran some very solid races. I’d be hopeful he would have done well from two to three. He’ll need to improve but hopefully he has that in him.”

O’Brien is similarly upbeat, telling the Final Furlong Podcast this week of Arizona: “He is a big, rangy horse. We always thought he was a horse to look forward to, for three.”

But the trainer also put in a good word for Wichita, the mount of Frankie Dettori. “He’s the same, a big, powerful horse with loads of scope. He’s like Arizona, he might carry a little bit more muscle. He’s done well.”