All Aidan O’Brien needs is Love to win 1,000 Guineas at Newmarket 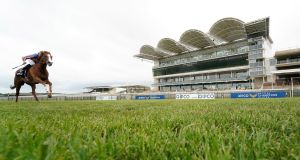 Aidan O’Brien will have a dozen runners when racing resumes behind closed doors in Ireland on Monday but on Sunday all he needed was Love to win the QIPCO 1,000 Guineas at Newmarket.

One month late, and in unique behind closed doors circumstances due to the coronavirus pandemic, it was a familiar classic outcome for O’Brien as Ryan Moore guided Love to an impressive victory.

Ireland’s champion trainer had to settle for the runner-up spot in Saturday’s 2,000 Guineas won by Kameko but there was no doubting the superiority of his latest classic winner.

Love was in control from over a furlong out and reversed juvenile form with a vengeance over the 11-4 favourite Quadrilateral. She eventually couldn’t even overhaul the 12-1 shot Cloak Of Spirits who had cut out a moderate pace from the start.

Ultimately Love ruled to the tune of over four lengths at the line and is now a 6-4 favourite for the Oaks at Epsom next month.

O’Brien completed that fillies classic double with Minding in 2016 and although the atmosphere at Newmarket was completely different this time the leading players were entirely familiar.

It was O’Brien’s sixth 1,000 Guineas triumph and a fourth in the last five years. Moore was winning for the fourth time in all.

The other Irish hope, Jessica Harrington’s Millisle, also started at 4-1 but was in trouble from some way out and finished only seventh.

That ended Oisin Murphy’s hopes of a Guineas double, the Kerry born jockey having ridden Kameko to beat Wichita and the odds-on Pinatubo a day previously.

But ahead of Irish racing’s resumption, and both Irish Guineas taking place at the Curragh on Friday and Saturday, this outcome confirmed how O’Brien’s Ballydoyle operation has hit the ground running.

O’Brien stayed at home rather than travel to Newmarket where Moore described Love as looking like the best three-year-old filly around.

“She’s a very uncomplicated filly and we’ve always thought a lot of her. She’s a typical Galileo and she was in control of the race from a long way out.

“I’d say it’s a possibility that she’ll stay (the mile and a half at Epsom.) At the moment she looks the best three year old filly around. I don’t know what the plan is but I’d say the Oaks is an option for her,” the rider said.

O’Brien later said: “We’re delighted with her. She was doing everything right all through the winter and the spring.

“She’s a lovely filly. We always thought she would get much further than a mile. She showed she got a mile last year and we always thought we’d start here and then maybe go to the Oaks and that’s what the lads were thinking about doing.

“The distance between the races should be perfect and we always thought the Oaks would suit her.”

1 Golf in Level 5 Covid restrictions: Clubs still waiting to hear if they can remain open
2 Gordon D’Arcy: Ireland don’t need to do a Finn Russell on it
3 Aki, Ringrose and Henshaw: Brian O’Driscoll has his say on Ireland’s midfield riddle
4 Hugo Keenan could start in changed Ireland team against Italy
5 CJ Stander ready for Italy after lockdown sheep battles
Real news has value SUBSCRIBE

Rashford gives Man United another win in Paris; Gordon D’Arcy on Finn Russell 07:34
Seán Moran: Let’s leave the confusion aside and enjoy this All-Ireland 06:30
Gordon D’Arcy: Ireland don’t need to do a Finn Russell on it 06:00
Beibhinn Parsons ready to move on the next level 06:00
CJ Stander ready for Italy after lockdown sheep battles 06:00
Here is your handy guide to sport on television this week