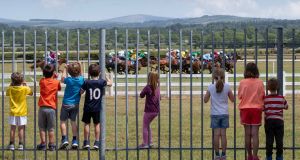 Irish racing resumed behind closed doors at Naas on Monday and was widely judged a ‘winner alright’.

The first major live sporting action held in Ireland in 11 weeks due to the coronavirus pandemic saw jockey Shane Foley waste no time hitting his stride with a stunning 13,218-1 four-timer.

There was a big race feel-good angle too as apprentice jockey Joey Sheridan guided the 3-1 joint-favourite Sceptical to success in the Woodlands Stakes.

As a result the Denis Hogan-trained horse, a cast off from Godolphin that cost just £2,800, booked his spot for Royal Ascot next week.

Aidan O’Brien’s More Beautiful could also be Ascot-bound but already has the distinction of having won the race that ended an unprecedented 76-day hiatus for Irish racing due to the Covid-19 emergency.

The measures required by Government to allow racing’s resumption, and which will be necessary for some weeks to come, were stamped all over Monday’s action.

Strict social distancing rules were observed throughout with only an estimated total of 300 people present on-site at different times throughout the eight-race card.

Everyone from jockeys to trainers and stable staff had to undergo temperature checks before being allowed enter the track and had to leave immediately after their work was finished.

Even the usual quick post-race debrief by jockeys were dispensed with and an eerie silence reigned throughout the day.

However, there was general satisfaction among participants and officials at how smoothly arrangements worked.

An Irish Horseracing Regulatory Board spokesman said that no one had to be turned away because of an elevated temperature and that delays were minimal during the thermal check process.

“It’s only a couple of seconds walking through it and it was all very smooth and straightforward. There’s a good atmosphere, everyone’s glad to be back, even though it’s very strange with so few people here.

“Naas have done a great job. They’re the first so they couldn’t copy anyone and they’ve done a great organising everything,” said the IHRB’s Niall Cronin.

Punita Arora’s 22-1 success in the Committed Stakes was the highlight of Foley’s four winners which included three for trainer Jessica Harrington.

She could not be present as no one over 70 is allowed go racing under the health protocols.

On a warm day, ,Foley said he found wearing a face-mask during races uncomfortable at times.

“But it’s important. We’re all in this together, to get through it. Health is paramount,” said the in-form jockey.

Foley also won on Harrington’s two year old newcomer Lucky Vega as well as Masteroffoxhounds in the finale. His other winners was the 18-1 shot Parkers Hill in a handicap.

Covid-19 even played an indirect role in Masteroffoxhounds being at Naas at all.

“This horse was meant to go to China but because of coronavirus couldn’t go and we have reaped the benefit of it,” explained Kate Harrington, daughter of the winning trainer. “He’s a nice horse and we haven’t had him that long as he was in quarantine.”

The equine performance of the day however came from Sceptical who is just 7-1 to win next week’s King’s Stand Stakes at Ascot. With owners also not allowed go racing, both Jim Gough and James McAuley couldn’t watch their bargain buy first-hand.

But despite Sheridan not being allowed use his 7lb claim, Sceptical made light of the transition to grass after three wins on Dundalk’s all-weather surface.

“He’s a special horse and so easy to train. I’m delighted for Jim Gough and James McAuley. They picked him out. Jim’s gutted he’s not here as he loves his racing but he has a good horse and will probably go to Ascot for the King’s Stand,” said Denis Hogan.

The impact on racing’s calendar from the pandemic can be gauged by how Tuesday’s Leopardstown card contains a couple of traditional Guineas trials taking place just a few days before the first Irish classics of 2020.

Not surprisingly none of the eight runners in the Listed Trial Stakes figure among the 15 entries that remain in Friday’s Tattersalls Irish 2,000 Guineas after the latest acceptance stage.

Equally unsurprisingly it will be a rare ‘domestic only’ race with no overseas runners. The unbeaten Phoenix Stakes hero Siskin is as low as 6-4 favourite in some lists to give Ger Lyons a first classic success.

Armory and Vatican City head a seven-strong list of possibles from Aidan O’Brien – already on the classic mark with Love in the Newmarket 1,000 Guineas – as he pursues a 12th victory in Friday’s big race.

O’Brien Snr has 20 declarations for Tuesday’s card including three of the six starters in the featured Group Three Derrinstown Stud Derby Trial.

Some of O’Brien’s most illustrious champions have taken his prize on-route to classic glory. But the Irish Derby is the first of Europe’s major Derbies to take place this year which underlines the unique nature of this season’s classic schedule.

Russian Emperor came from all but impossible position to break his maiden on the first day of the turf season at Naas in March and that experience could prove crucial on Tuesday.