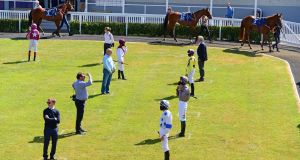 More Beautiful ensured Aidan O’Brien got off to a winning start as Irish racing resumed at Naas on Monday.

Seamie Heffernan was always to the fore on More Beautiful, who boasts an excellent pedigree as a daughter of War Front out of Moyglare Stud Stakes winner Maybe.

More Beautiful was clearly in control with two furlongs to run and she stretched away in the closing stages to triumph by a very cosy three and a half lengths from Roses Blue.

Betfair immediately made More Beautiful the 7-2 favourite for the Queen Mary Stakes at Ascot on Saturday week.

Hefferan said: “She’s a War Front and every one of them have a lot of ability. She couldn’t have done it any easier and I liked what I felt today.”

Lippizaner was the only runner with previous experience and it looked as though he would register his first win as he assumed command in the six-furlong heat.

However, Lucky Vega proved too strong up the rail and was half a length in front at the line, with Alex D staying on for third.

Winning trainer Jessica Harrington is not permitted on track as the coronavirus protocols employed by Horse Racing Ireland preclude over 70s attending meetings.

Her daughter Kate was on hand and said: “You would have to be happy with him. He never came off the bridle at home and Shane (Foley) said he was very green throughout the race.

“He was on the grass once or twice at home, but that was it and they were only steady bits.

“We thought he was a nice horse and it’s great to see him do it on the track. He showed a great attitude in the finish and he’s only going to improve.

“Mum will talk to the owner and see what he wants to do. He’s a big horse and I’d say he’s only 80 per cent there.”

Foley made it a double as Parkers Hill finished with a flourish to land the second division of the Clinton Higgins Chartered Accountants Handicap.

The first division had gone the way of Nordic Passage (14-1), who shrugged off the burden of top-weight to claim a three-and-three-quarter-length verdict in the hands of Donagh O’Connor.

The winning rider said: “He carried me through the race beautifully — I hit the front too soon, but I got carried there. He’s a horse with loads of ability and has his problems.

“The last day in Dundalk he was too free with me and we said we’d step back in distance. He floated on the ground and he only had one race before on grass.

“He’s unexposed on the turf and we are really looking forward to him now.”

Of the protocols being enforced on course, O’Connor added: “All the procedures here at the racecourse are going very smooth and it’s all working perfectly. We are just delighted to be back and long may it last.”