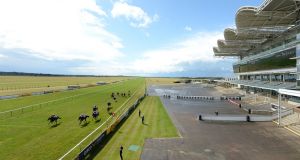 The 24-year-old rider from Killarney, Kerry took another giant step on the path to potential superstardom when guiding the 10-1 winner to a neck defeat of Aidan O’Brien’s Wichita with the odds-on favourite Pinatubo beaten for the first time in his career in third.

Clear of his contemporaries as a two-year-old, evidence that Pinatubo’s rivals had caught up with him at three came outside the furlong pole when he started to get the worst of a battle with Wichita.

In behind them though Murphy started to angle Kameko, who had been drawn on the rail, towards the centre of the Rowley Mile.

The Andrew Balding colt, carrying the colours of the big-race sponsor, Sheikh Fahad’s Qatar Racing, momentarily drifted right. But when straightened up, Kameko had enough left to land a second Group One prize having also won at the top level as a juvenile in the Vertem Futurity.

“I’ve never won a classic in Britain and it means the absolute world to me. It’s the stuff of dreams,” Murphy said. “It was a gutsy performance. He hardly blew a candle out afterwards. He must have a tremendous amount of ability.”

The exultant Kerryman, a nephew of the Cheltenham Gold winning trainer and jockey, Jim Culloty, had previously come close to classic glory when Roaring Lion finished third in the 2018 Derby for Qatar.

However a first major classic, and one gained from Frankie Dettori on the runner up, suggests this most unusual of Guineas renewals may end up being recalled as a landmark moment in a rare career - as much as for the unprecedented circumstances.

Held a month late and behind closed doors due to the coronavrius pandemic, Murphy, in his face mask, returned to silence, including in the winners enclosure. If the aftermath felt sterile, the action on the track was typically cut-throat.

All eyes were on Pinatubo, rated the best two year old champion in quarter of a century, and heralded beforehand as a potential, and timely, all-time great.

For one brief moment at the two furlong pole the diminutive colt looked to be going well enough to possibly justify such billing.

However his run flattened out as he struggled to get past Wichita. Instead the latter briefly looked like giving O’Brien an 11th win in the race - and a second classic with Dettori after Scorpion’s St Leger 15 years earlier - only for Murphy to get the timing right on his winning run.

Bookmakers immediately made Kameko, who is by the same sire as Roaring Lion, a 3-1 favourite for next month’s Epsom Derby.

It was a first Guineas for Balding whose father, Ian, saddled the legendary Mill Reef, famously beaten by Brigadier Gerard in a vintage Guineas renewal in 1971, before going on to win the Derby.

Attention inevitably centred on Murphy however who has made a blistering start in trying to retain his jockeys championship since racing resumed in Britain on Monday.

The atmosphere might have been surreal and eerie for such a major success but the Irishman was still emotional at the significance of it.

“I don’t want to cry. My boss, Sheikh Fahad, is at home in Newmarket and obviously with the current pandemic he couldn’t be here.

“I started my career with Andrew Balding. To ride a classic winner, my first one, in these colours - this horse’s father is Kitten’s Joy, the same as Roaring Lion - is incredible,” Murphy said.

Roaring Lion bounced back from his Derby defeat to become the outstanding mile and a quarter champion of his generation. He was retired to stud but died with colic last year.

Comparisons between him and Kameko in terms of the Derby’s mile and a half stamina test are inevitable over the coming weeks although Balding expressed confidence about going to Epsom.

“To me it (Derby) looks the obvious choice. There would be a stamina doubt but there’s only one way to find out.

“We have to let David (Redvers, racing manager), Sheikh Fahad and Oisin all put in their opinions. I would be slightly reluctant to run him back at Ascot personally, so we will see what is on offer for him.

“He will certainly get a mile and a quarter, but there is a certain race over a mile and a half in July that would be quite appealing!” the trainer said.

Balding felt the behind closed doors atmosphere was a minor element in the overall context of a Guineas victory.

“It is huge and we are very grateful to everyone who has worked hard to get racing back on, and as I said a Guineas is a Guineas whenever it is run. I couldn’t be happier,” he added.

He also said: “he was always travelling well and just when they quickened it looked like he was going to need a bit of a split and he didn’t get the cleanest of runs. He went a little right-handed when he first let go and I was always confident he would get on top.

“It was only when he was past the line that I was happy though. That was the one we came here for and wanted.”