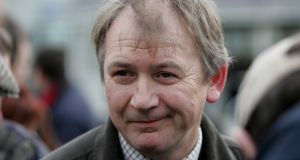 Maybe the most extraordinary thing about the Viking Hoard case is how little noise it has made. Here we are in a winter with virtually no sport to talk about and still it hasn’t captured the broader imagination.

This is so much more than a workaday sports story and yet in the five days since the Irish Horseracing Regulatory Board published its findings, it has been referred to - obliquely - just once on the front of an Irish newspaper.

This isn’t purely because there are more serious things to talk about right now. Since the news broke last Tuesday, there have been splashes on Conor McGregor, blurbs on Liverpool and United, straps and subheads on Leinster and Munster, big pics of GAA retirements and nods to the late Jerry Kiernan. Only once, in a blurb on the front of the Irish Independent last Wednesday, was mention made of “The murky world of Irish racing”.

It has been carried here and there in the sports pages, yes, and a couple of the Sundays went big on it yesterday. But that’s the least you would expect for so serious a case.

RTE radio had HRI chief executive Brian Kavanagh on Saturday Sport but they only talked about the issue for six minutes before moving onto the complications around getting Irish horses to Cheltenham in a post-Brexit world. There was a deeper exploration of it on Game On during the week when Marie Crowe got Ruby Walsh to break it down but it didn’t get a lot of play elsewhere.

This isn’t just an observation on traditional media, by the by. Think about it - how often has it come up in general sports chat over the past week? Has it been mentioned in any of your WhatsApp groups? If you’re not immersed in horse-racing Twitter, do you have anything more than a vague awareness of what this column is yakking on about?

If not, a very brief primer. Viking Hoard ran in Tramore in October 2018, trained by Charles Byrnes, ridden by Kevin Brouder. After jumping six hurdles and being clearly out of sorts, he was pulled up by the young Kerry jockey. Upon getting drug-tested, Viking Hoard was found to have raced with 100 times the limit of the sedative ACP in his system. A subsequent investigation found irregular betting patterns, namely a huge drift in the horse’s odds on the day of the race and a foreign punter having laid Viking Hoard to lose - putting up around €35,000 to win €3,200.

The case took over two years to be sorted and when the verdict came last week, Byrnes was suspended for six months and fined €1,000. The IHRB didn’t allege that Byrnes doped the horse or that he was connected to the suspicious betting. The punishment was handed down for leaving Viking Hoard unattended at the stable yard in Tramore on the day. Byrnes is appealing.

Now, maybe you’re reading this and shrugging your shoulders at it all. Something dodgy in Irish racing - well, who’d have thunk it? How was the ride up to the big city in the turnip truck, Mal?

And, yes, it’s very obviously true that we’re dealing with a sport that has plenty of previous when it comes to schemes and wheezes to turn a gambling edge a particular way. There’s plenty of grubby behaviour to go around when it comes to racing and there always has been.

But the Viking Hoard case is surely of a different stripe altogether. This horse was doped with 100 times the legal limit of sedative. A 20-year-old kid was sent out to ride the race unaware of what was going on underneath him. Ten other jockeys lined their horses up for the start with no hint of the potential for mayhem that was now in the race.

Ruby Walsh has described falling from a horse as being thrown from the bonnet of a car going 30 miles an hour. A fall in a hurdle race can often be more serious than in a steeplechase because the obstacles are smaller so the horses don’t have to slow down quite as much on approach. Whoever nobbled Viking Hoard did so with obvious contempt for the horse, which is bad enough. But they also did it not caring what became of the 10½ stone jockey earning his flat fee of €184.59 for guiding the half-ton gelding around the track. Or the 10 others who had to negotiate their way around him.

As it happened, Viking Hoard was well out the back from the start and Brouder had to pull the whip before even reaching the first hurdle to try and get the horse to engage with his job. Given the level of sedation the horse had undergone, it’s a small miracle the jockey got him safely over six hurdles before pulling him up.

The betting angle to all of this is obviously deeply depressing and not to be ignored on any level. But the safety concerns should surely trump all of that. This is the equivalent of someone tinkering with the brakes of a racecar. Anything could have happened that day in Tramore. What occurred was, by some distance, the most benign outcome possible.

For everyone to shrug it off as just being another story about Irish racing colouring outside the lines isn’t good enough. This isn’t some bookie getting turned over in a roguish coup, it isn’t some genius stroke pulled to hoodwink The Man. It was an incredibly dangerous thing to have happened and racing people need to stand up for their sport here and talk this thing out in public.

Because otherwise, a general view will go forth that this is no big deal and maybe even typical of what happens in the sport. If that’s allowed, it will be nearly the most depressing thing of all.