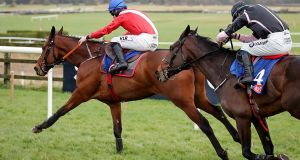 Envoi Allen enjoyed a lucrative stroll at Punchestown on Sunday after his eagerly anticipated head-to-head with Asterion Forlonge failed to unfold.

Anticipation turned to dramatic anti-climax when Asterion Forlonge crashed out at the first fence in the Grade 3 Sky Bet Killiney Novice Chase.

It was a second successive fall for the grey who was ridden by substitute jockey Danny Mullins after Paul Townend aggravated an old shoulder injury in a fall at Fairyhouse on Saturday.

So rather than a fascinating exercise in discovering if Envoi Allen could successfully concede 11lbs to his rival, the 1-2 favourite was left with a straightforward task.

Even the loose pair of Asterion Forlonge and Sempo, who was hampered and unseated his rider at the first, couldn’t deflect Envoi Allen from the task in hand of smoothly maintaining his unbeaten record.

Including a point-to-point victory, the most exciting young talent in National Hunt racing now boasts a perfect 12 from 12 career.

Considering the circumstances, it was no surprise many bookmakers left Envoi Allen unchanged for his Cheltenham festival target, the Marsh Novice Chase.

That those prices are mostly odds-on reflects how the Gordon Elliott-trained star’s status as jump racing’s poster-horse is currently all but impregnable.

Jockey Jack Kennedy even found more to admire about the apparent paragon in how he refused to be distracted by the wayward loose horses.

“I had my heart in my mouth a few times. He’s so honest. They (the two loose horses) crossed over me at one of the fences down the back but he never took his eye off the fence. He’s unbelievable,” he said.

“A lot of horses would’ve gone down and taken their eye off, or maybe galloped into it, but he got underneath it and never touched a twig.

“He was extremely quick away from the back of it too. He’s a very clever horse,” Kennedy reported.

Two remaining opponents, Fils d’Oudairies and Dinny Lacey, were no threat and Envoi Allen is set for Cheltenham in March as the hottest of Irish hotpots to collect a third successive festival victory.

“It’s a bit of an anti-climax when the other horse went at the first. Jack said he went around in second gear with his ears pricked.

“When he asked him to quicken going to the last he did. He got a bit under the last and he quickened again.

“He didn’t mind the ground and he didn’t do anything wrong. I think he’d be better with a lead as he’s idle but he had to do his own donkey work,” said Elliott.

However, even such an apparently flawless talent such as Envoi Allen isn’t above wider uncertainties which is why he will continue to hold entries in next month’s Dublin Racing Festival at Leopardstown.

“He’s in everything at Leopardstown for fear something happened (with travelling) in Cheltenham. But I’d say we will go straight to Cheltenham. He’s been to Cheltenham twice and showed he can win around it,” Elliott added.

If fears about travel headaches as a consequence of the coronavirus pandemic are likely to be a recurring feature over the weeks leading up to Cheltenham then they might not be compounded by some serious Brexit issues too.

Willie Mullins was out of luck with Grangee in a Listed bumper at Market Rasen on Saturday. She finished third to the impressive winner Eileendover.

However, transporting the first Irish-trained runner in Britain since the end of the Brexit transition period proved to be a much smoother exercise than initially thought.

Talks on streamlining a temporary admission procedure for runners crossing the Irish Sea in either direction are likely to continue over the coming days.

However, Mullins was relieved with the process surrounding Grangee’s transportation to Market Rasen and the champion trainer confirmed that no VAT on the horse’s value had to be paid in order for her to enter Britain.