Gambling addict’s story is a salutary read in Cheltenham week 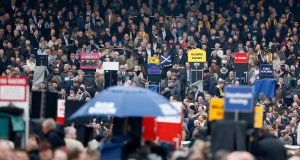 For a lot of folk, Cheltenham presents the four days in the year where it feels acceptable to gamble in a way that we just wouldn’t on the other 361 days. Photograph: Alan Crowhurst/Getty

There is presumably no accident in the timing of the release of Tony 10, Declan Lynch’s new book written in conjunction with Tony O’Reilly, the Wexford postman who stole €1.75m from his post office in order to feed his addiction to gambling.

If you’re going to tell a story about the way a destructive betting habit can hollow out a life, the run-up to Cheltenham is as likely a time as any get a hearing for it.

For racing people, Cheltenham is the most important week of the year. For general sports fans, Cheltenham is horse racing for people who aren’t really into horse racing. For most of us, it’s four days in the year where it feels acceptable to gamble in a way that we just wouldn’t on the other 361.

The fact that you’re doing it during the week, during work-time, maybe taking a half-day or two to go to the pub for it – all that combines to give it an illicit feel, a stolen look at a different world. Half the fun is knowing you wouldn’t do it in real life.

Cheltenham doesn’t play any particular part in Tony 10. Tony O’Reilly lost plenty of money on horses but he lost plenty of it on golfers and tennis players and footballers and basketball players too. But you can’t read the book in this week of all weeks without being a little bit terrified of how brutally and comprehensively gambling can destroy someone’s world.

There is a particularly chilling part early on when it’s made clear that the whole thing started out as an ordinary sports fan having a bit of fun. Reading the book, you eventually become desensitised to the numbers involved but it’s the early ones that really jump from the page when Lynch quotes from the official betting history print-out that documented every bet he made online.

“It is not the only bet on that day, but it stands there as if it is seeking your attention, so ridiculously small it seems as surreal, in its own way, as a €20,000 accumulator on five bad tennis matches. You couldn’t make it up – that a man would start at a euro and build to ten million, but there it is: one euro, on page one.

“Tony had gone through his €50 Paddy Power gift voucher in a couple of losing football bets on Southampton and Barcelona. Then he made a deposit of €10, the first online bet he would make using his own money. And perhaps it was a sign of some subconscious foreboding on his part, but he broke this €10 into four separate bets of €1, €2, €2 and €5, on Michael Owen to score for Liverpool. As if he still wasn’t sure how the online system worked, or didn’t trust it.”

It’s all so drab and ordinary. A tenner here, 20 quid there. Win some, lose some, doesn’t matter either way. That’s the betting most of us do. How does someone go from there to gambling away nearly ten and a half million quid? The thoroughly uncomfortable answer that screams out from the book is this – you do it so very easily indeed.

The worst thing any nascent problem gambler can do is be any good at it. O’Reilly eventually lost everything and ended in jail. But to get there, he had to do plenty of winning along the way. Just underneath the ‘total amount staked’ figure is the total amount won – an eye-watering €9,013035.03. O’Reilly was so bad at gambling he won over nine million euro doing it.

There was no underlying problem he was trying to escape from. His home life was good, he got married and had a little girl while it was all going on. Oftentimes addiction can be the outwardly expressed rage against an inner beast of some sort, a way to mask the turmoil. This wasn’t that.

Eventually he finds himself in the surreal situation of trying to fend off auditors who have arrived at his post office (from which he has already helped himself to €900,000) while taking a phonecall from Paddy Power – the media chap himself who will be ubiquitous as ever this week – telling him that there’s a problem with the website this morning but if he wants to have a bet he can call one in to Paddy’s personal mobile until it’s back up and running. This was after O’Reilly had just turned €5,000 into €462,000 over the course of a weekend.

Tony 10 is a jaw-dropping account of how this can all go catastrophically wrong. It’s not an easy read in Cheltenham week but it could be a vital one for someone, somewhere along the way.

1 Cheltenham faces criticism after racegoers suffer Covid-19 symptoms
2 Andrew Conway diary: In search of a competitive edge
3 America at Large: On Long Island, longing for a return to our field of dreams
4 Health official says decision to hold Liverpool-Atlético game was wrong
5 ‘Every team is in the same position – we all just want to play games’
Real news has value SUBSCRIBE