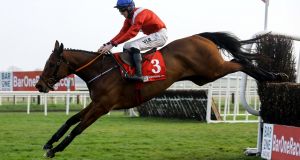 Envoi Allen will be looking to stay unbeaten at Punchestown on Sunday. Photograph: Lorraine O’Sullivan/Inpho

Any ideas of Envoi Allen enjoying some low-key Cheltenham festival prep at Punchestown on Sunday have vanished with Asterion Forlonge lining up against him.

Rather than a lucrative stroll for the most exciting young talent in the jumps game, the Grade 3 Sky Bet Killiney Novice Chase instead holds the potential for a mouth-watering clash.

The crucial factor is the 11lbs Envoi Allen has to concede to his rival.

Asterion Forlonge dramatically crashed out on his last start at Limerick on St Stephen’s Day so has plenty to prove in the jumping department.

But if he manages that then Envoi Allen is faced with conceding a massive chunk of weight to a Grade 1 winner over his favoured right-handed conditions.

It’s also worth recalling how both went into last season’s Cheltenham festival with an almost identical hurdles rating.

Asterion Forlonge’s habit of jumping right came to the fore in the Supreme but he remains a high-class horse.

It’s hard to see any other novice being short odds-on to beat him faced with the task of conceding 11lbs but that is the exalted regard in which Envoi Allen is held.

The Gordon Elliott-trained star made it an unbeaten 10 out of 10 career starts with a smooth victory in the Drinmore and has become widely viewed as a near paragon talent.

It’s why he’s an evens favourite for what would be a third straight Cheltenham festival success in the Marsh Chase in March and why his huge fan-club probably won’t hear of defeat whatever the weights on Sunday.

“Envoi Allen would ordinarily bring a fantastic crowd but in the circumstances it’s not possible. But it looks like being perhaps the clash of the season,” Punchestown’s manager Conor O’Neill said on Friday.

The eagerly-anticipated contest will be the first race at Punchestown on Sunday with an off-time of 12.50.

It will be followed by the Grade 2 Moscow Flyer Novice Hurdle which holds its own appeal with Master McShee and Dreal Deal set to line up.

“They’ve been front-loaded to the front of the card to give the best horses the best of the ground. We would always do that where possible,” O’Neill added.

There isn’t much ‘little-guy’ romance to the Envoi Allen tale. Instead the story to date of Cheveley Park Stud’s £400,000 purchase is of sustained excellence.

The impression the strapping French bred has made on purists means there are already odds circulating about him securing Cheltenham Gold Cup glory the season after this.

So far Envoi Allen has assembled a perfect record while always looking to be operating within himself.

Should he manage to do the same against a top-form Asterion Forlonge – while giving away such weight – then purists will purr even more about what heights this horse might eventually reach.

Co Waterford trainer Paddy Corkery provided one of the feel-good stories of the Christmas action when sending out Master McShee to win a handicap at Leopardstown.

Now he reaches for black-type success against the top stables in the country and looks to hold first-rate claims.

Along with the prolific Dreal Deal - bidding for six-in-a-row - Master McShee already represents a very decent level of accomplishment on figures while holding out the promise of more to come.

Willie Mullins runs three in a race he has won seven times. Paul Townend has opted for Ganapathi who runs in the Al Boum Photo colours.

Whether any of seven others in the race can successfully concede the mares allowance to Echoes In Rain however looks debatable.