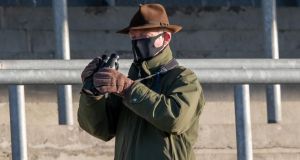 Trainer Willie Mullins has revealed that 19 per cent of Grangee’s value has had to be paid in VAT. Photograph: Morgan Treacy/Inpho

An 8.00 inspection at Market Rasen on Saturday morning will decide if the Willie Mullins trained Grangee earns herself a footnote in ‘Brexit’ history.

Should racing get the go-ahead Grangee will be the first Irish-trained runner in Britain since the UK’s departure from the European Union.

She is set to line up at the Lincolnshire course in a Listed bumper that Mullins won a year ago with Panic Attack.

Brexit’s impact has already produced more than a few panicky moments for racing but fears expressed by Ireland’s champion trainer about the potential impact of VAT rates on travelling horses across the Irish Sea appear to have receded.

Mullins had expressed concern about having to pay 19 per cent of Grangee’s value to get her into Britain but expressed himself “pleasantly surprised” that it didn’t transpire.

“We’ve been hearing all sorts of stories and no one would tell us what was happening so I said ‘let’s load up a horse and go and see.’ And we were pleasantly surprised.

“We are travelling on a temporary travel document because we are only going in for a race and out again and with that there are no VAT implications,” he reported on Friday evening, which is good news for travel arrangement in regard to Cheltenham in March.

A more immediate concern for Mullins is that Grangee – winner of the same race at Galway in October that Panic Attack won in 2019 – gets a shot at some valuable black type.

Market Rasen’s clerk of the course is confident racing will get a green-light despite a wintry weather outlook for the east of England.

“The track is perfectly raceable at the moment. We’d had no frost, no snow. I know a lot of Lincolnshire have had snow but it’s absolutely fine here.

“It’s just that the forecast is suggesting there are potentially some wintry showers around tomorrow morning and we don’t want to get caught out if the snow did start to settle in the early hours,” Jack Pryor said.

Nico de Boinveille takes the ride on Grangee in a seven runner contest that also includes the unbeaten four year old Eileendover, a granddaughter of the 1,000 Guineas winner, Speciosa.

The coronavirus pandemic rather than Brexit has dominated Robbie Power’s focus in recent months and the jockey makes a return to action at Fairyhouse on Saturday.

Covid-19 travel restrictions forced Power into relocating to Britain during the autumn where he rode up to New Year’s Eve.

He has returned to Ireland since then and is free to resume riding this weekend with seven mounts between Fairyhouse and Punchestown.

The first of them is the Auteuil winner Teahuppo who makes his Irish debut in a deep looking four year old hurdle.

Teahuppo runs in the colours of businessman Brian Acheson’s Robcour operation which secured a first Grade 1 success with Bob Olinger at Naas on Wednesday.

Robcour also have Merry Poppins in the race although Youmdor, an impressive Gowran winner in November on his own Irish debut, looks a difficult opponent.

Power’s old ally Jessica Harrington supplied him with his last winner, Magic Of Light, a month ago and can get him back in the winner’s circle again through Port Stanley in Saturday’s Beginners Chase.

Power won’t be in action however in the featured E75,000 Dan & Joan Moore Handicap Chase.

Instead the jockey focus is likely to be on top claimer Simon Torrens who teams up with Chatham Street Lad for the first time.

A one day ban for his whip use on A Plus Tard at Leopardstown over Christmas rules O’Keeffe out and Winters has opted to use Torrens’s 5lb claim in this 16-runner handicap.

The Grand Annual winner Chosen Mate’s presence means nine of them are technically ‘wrong’ at the weights.

Chatham Street Lad drops back to two miles but that shouldn’t trouble him and if Grade 1 ambitions later in the season are to be sustained he should be tough to beat here.

Another Cheltenham winner lining up for the feature is The Shunter, victorious in the Greatwood Hurdle under Power last time, and who lines up back over flights from a couple of pounds out of the handicap proper.

Regular rider Brian Hayes missed out on Cheltenham but is back in the plate for a new big-money target.

It’s almost a year since Robcour splashed out £240,000 for the point to point winner Gerri Colombe who makes his racecourse debut in the bumper.

His biggest threat may be Viscount Gort, runner up in a hurdle at Cork last month.