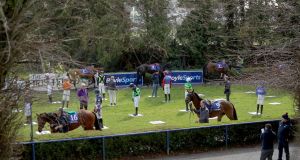 It begins, then. The gears and levers of sport in Ireland start to crank up and get going from today, the first slow stirs of normality since mid-March. Behold the resumption of our national sports – we’re grousing and where’s-mining to beat the band. We may not know much about the road ahead but we know what we like. And boy do we love the smell of a bitching session in the morning.

This is not our fault. Irish life has made us this way. Your sport can start back but mine can’t? How is that fair? Every park in the country has groups of players shuttling through drills with cones and nets and all the rest of it but my Monday night five-a-side is still months away? Hope yiz all pull a hamstring.

Into this mix, horse racing was always going to catch some heat as it flexed its considerable political muscle over the past fortnight. When the original roadmap was announced, the comeback date for race meetings was down as June 29th. It took a little under a fortnight for the government to be informed of the error of its ways and now there will be racing on June 8th.

Due to the way things are done in Ireland, nobody knows the precise reasons behind the turnaround. We know, in a woolly sort of way, that Horse Racing Ireland (HRI) lobbied the right people and got the right decision for themselves in the end. We know, with the same fuzzy certainty that we know most things in Irish life, that horse racing was able to make its case to the right people in a way other sports and, more to the point, other industries weren’t. And that in the end, they produced for themselves a happier outcome than had been the case before.

This should, by rights, be a cause for celebration. Doesn’t matter if you’re not a racing fan, doesn’t matter if you’re not a sports fan. All you need to be is a fan of getting life back to some sort of settled state. The net result here is that a tiny building block of normality will soon be slipped back into place. If you never watched a horse race in your life, the fact that the people in charge of reopening society have decided that this is doable should still bring you joy. It’s one step closer to getting the thing you care about up and running again too.

But, of course, that’s not how this works. Any chance there was of the wider public cheering on the resumption of horse racing has been torpedoed by the ham-fisted way it has come about. One of two things happened here. The people drawing up the initial roadmap either genuinely believed it was too risky to restart horse racing before June 29th or it simply didn’t occur to anyone to give the sport an earlier date. Neither is good.

It’s all very well for Leo Varadkar to be emphatic over the weekend in declaring that horse racing is worth half a billion a year to the economy. But that was true a fortnight ago as well and the original plan still said June 29th. As far as anyone can tell, the only thing that changed in the meantime was a behind-the-scenes effort by the HRI to get the powers-that-be to change their mind. Others may well have been involved – we don’t know. All we know is it worked.

Now, the fact that it did should be welcomed by all. Racing is major Irish sport and a crucial rural industry. Any misgivings over how it came to be moved up the packing order are separate to the opportunity racing has here to show a way forward. To the HRI’s credit, they are approaching it in a serious, responsible and forensic way.

Everyone involved in organised sport should take half an hour sometime to read through the 77-page document they released over the weekend detailing the protocols under which meetings can go ahead. The amount of hoops racing people will have to jump through to run a day’s card is genuinely quite stunning.

Daily questionnaires to be filled out by 6pm the previous day if you are to be allowed entry to the course. Thermal screenings on arrival. No person-to-person media interviews. No owners allowed. No showers in the weighroom, no saunas, no food, no televisions. Jockeys must wear masks. Starting stalls must be disinfected between each race. Loitering anywhere is forbidden. Everything you thought was okay at a racecourse before almost certainly isn’t now.

Racing should be getting genuine applause for being the first to do the hard work of coming up with a way to get things started again. But because of the needless subterfuge around it all, they were left open to another cloudburst of flak on the back of it. Some of it was leftover bad juju from Cheltenham and plenty of it was deserved. The smell of special treatment for a sport that is the plaything of the rich is never far away.

Solidarity has been such a potent weapon in fighting the virus. Suspicion dilutes it, drop by drop, until all you’re left with are watery guidelines that nobody respects

Some of it was wrong-headed too, of course. Senator Gerry Craughwell wasn’t long puffing himself up to his full height on Twitter and announcing that: “I would think this has more to do with #gambling than anything else. If I am right its wrong in every way to open this industry at this time. Families are already suffering #betting will bring more hardship.”

It’s hard to know what to do with that kind of thinking. The good senator’s heart might well be in the right place but the idea that problem gamblers have spent two months waiting for Naas and Kilbeggan to come back before they have a bet is a fairly fundamental misunderstanding of that particular issue.

Here’s the thing, though. Craughwell is able to wonder aloud whether or not the gambling lobby might have been involved because nobody has given any clarity as to what the actual process was. Maybe this was just Fine Gael TDs looking after their constituents, maybe it was the big bookies telling them which side their bread is buttered, maybe it was just the right thing to do. Everyone has their own single transferable conspiracy theory.

Getting sport back up and running is going to be long and slow and painstaking. The fact that there is to be a government taskforce dedicated to it now is potentially a step in the right direction. It has some serious names involved, good people who are good communicators. It would be a terrible shame to waste them.

There has to be someone whose job it is to explain all this to people. You want to know why your sport is still behind the curve? Someone should be out in front of it, telling you before you even ask. The taskforce should hold weekly press conferences, online tutorials, webinars, anything that will give people more information on how decisions are being made.

Solidarity has been such a potent weapon in fighting the virus. Suspicion dilutes it, drop by drop, until all you’re left with are watery guidelines that nobody respects. If people suspect that racing got something it shouldn’t have in this case and start acting out on the back of it, the government only have themselves to blame.