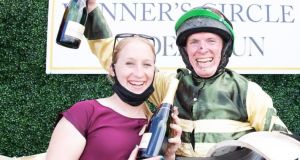 Following the retirement of US jump racing’s most successful ever trainer, Jonathan Sheppard, Brion has taken over the training of half a dozen horses he sent to Ireland in November to race here.

The experiment began when the first of the six, Baltimore Bucko, ran an encouraging third at Limerick’s Christmas festival.

When this Clonmel card originally got frozen off it prevented a potentially perfect retirement send-off as French Light was fancied to win for Sheppard before he stepped down.

The licence has since been transferred to his former assistant, Brion, who has the opportunity to saddle not only her own first winner but also a first US-trained winner over jumps in Ireland.

French Light lines up in a 10-runner novice hurdle under America’s champion jump jockey, Irishman Ger Galligan, and Brion is taking encouragement from her Christmas experience.

Baltimore Bucko has been handed a mark of 118 by the Irish handicapper for his effort at Limerick and French Night is rated a superior horse by connections.

“The ground is the question mark but I would have thought the horse in Limerick was more ground dependant than this horse is,” said Brion on Monday before addressing the different training methods either side of the Atlantic.

“They take a completely different training regime here to get them ready to run compared to what we do.

“But Baltimore Bucko won on very fast ground in America and turned around and ran like he did on heavy [at Limerick]. It kind of makes you think you can train a horse to do anything.

“Plus they are Irish bred and it helps to have that in the DNA,” she added.

French Light – by the same sire as Envoi Allen – is a product of the Irish point to point circuit, winning once and finishing fourth to the top-class Ferny Hollow between the flags.

He has won twice since going to America and could set up a busy week for the small US string based in Co Wexford this winter.

The dual-Grade One and Eclipse award winner Winston C is rated the best of them and is on course to run in a handicap at Navan on Saturday.

“It [Navan] is probably not a track that really suits him but we want to give him a race before deciding if we want to take the route of Grade One’s and big boys or a lesser route. It will be a good starting point,” Brion said.

It is almost 30 years since the American-trained colt Fourstars Allstar sprang a shock in the 1991 Irish 2,000 Guineas at the Curragh. He is still the only US-based horse to win a European classic.

The only US-trained horse to win over jumps in Britain was Lonesome Glory who won over hurdles at Cheltenham in 1992. A year later he also scored over fences at Sandown.

Six days later the horse started a warm favourite at Thurles only to unship his rider at the first. He looks worth another chance in Tuesday’s handicap chase.