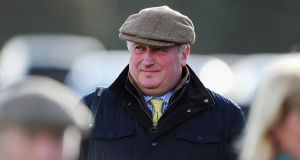 Vicente joined the list of dual Coral Scottish Grand National winners after getting up in the final stride at Ayr.

A faller at the first in the Aintree National two weeks ago, he could be spotted travelling noticeably well on the final circuit as Sam Twiston-Davies nudged him into contention.

It was Twiston-Davies’ father, Nigel, who looked to have the race won with Cogry who went clear under Jamie Bargary despite only finishing second in the West Wales National six days ago.

But as the pair duelled for the line, Vicente (9-1 joint-favourite), who was bought by Trevor Hemmings before Aintree as a replacement for the ill-fated Many Clouds, prevailed by a neck.

Twiston-Davies snr was also third with the veteran Benbens, with Alvarado placed in the race again in fourth.

“Paul had him primed for the National, but sadly it didn’t go to plan so he said he’d bring him here and it’s worked out great,” said the winning rider. “He’s a very brave horse, he’s tried very hard and saved my day.

“Paul is one of the best trainers in the country, it doesn’t matter what standard of horse we’ve got, he finds a way to win with them.”

Twiston-Davies and Nicholls were only narrowly touched off in the Scottish Champion Hurdle with Zubayr, and with Nicky Henderson’s lead in the trainers’ championship now under £200,000, that valuable prize could look crucial next week.

Nicholls said: “Of course we can still win it, but everything will need to go right and we’ve had a couple of results today, like Zubayr, which would have made a difference. Luck hasn’t been with Sam today.

“Nicky’s had a fantastic season with his Grade One horses, and so have we — we won’t give up until the last day.

“Sam is part of a big team, we’ve got a lot of good jockeys and he heads them, he’ll be with us a long time.”

Hemmings said: “I just need to win the Irish and the Welsh now.

“I bought him because we lost Many Clouds and I didn’t have a runner in the National.”