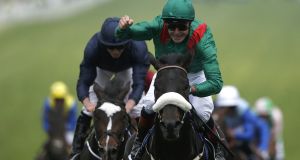 Pat Smullen on Harzand wins The Derby for “the greatest trainer in the world.” Photograph: Alan Crowhurst/Getty Images

There are over 12,500 races run in Ireland and Britain every year. If the Aintree Grand National is famous even to those who don’t pay attention to any of the others, for many of us in thrall to the sight of a running thoroughbred it is the Epsom Derby which remains the most evocative and coveted race of all. It has defined the sport for over two centuries. That’s why Harzand winning the 237th renewal felt apt.

Harzand won’t be remembered as an outstanding winner. He isn’t even the best of the five Derby winners bred by his owner, the Aga Khan. But he will forever be remembered for providing Dermot Weld, a trainer long since globally acclaimed for redrawing the boundaries of international racing, with a win in the race that matters most.

Not winning the Derby wouldn’t have threatened Weld’s place among the most outstanding trainers ever produced by this country. However, when Harzand overcame an injury scare on the morning of the first Saturday in June to eventually power home under champion jockey, Pat Smullen, it felt appropriate that the man who masterminded his victory should now figure forever on racing’s most exclusive roll-of-honour. 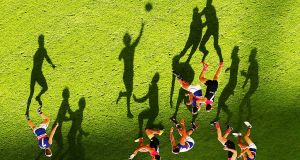 Impressively, even in the midst of his own joy, Smullen immediately grasped that significance, acclaiming his boss as “the greatest trainer in the world.” Even the famously smooth Weld, who in 1993 changed the face of world racing with Vintage Crop’s Melbourne Cup success, and immediately started soothing bruised Aussie feelings by quoting the poetry of the local poet, Banjo Patterson, conceded the Derby was something else again.

“I had won 22 classics before Saturday, but not an Epsom Derby. It had to be done. It was important to me,” he said the day after. Just two weeks after that Weld reached 4,000 career winners when a much more moderate beast called Sea Swift won at Naas. It was a landmark moment too. No Irish trainer has won more races. But there’s no betting on which of those 4,000 means most.

Low Light: In a sport often branded arrogant it was dispiriting to see the controversy over Brian Kavanagh’s reappointment for a third term as chief executive of Horse Racing Ireland live down to that reputation.

HRI’s chairman Joe Keeling apologised to an Oireacthas Committee hearing in October for the way Kavanagh’s appointment was handled. Keeling had sought a third term for Kavanagh despite the job not being advertised and the board of racing’s ruling body - which will receive €64 million of public money in 2017 - not formally approving such a step.

After apologising at the Oireachtas Committee Keeling was then invited to ponder if he would do anything differently. His answer indicates racing’s inability to recognise how its bread is buttered on the public side - “I don’t think so. I would always have acted in the best interest of HRI.”