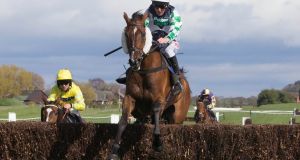 Two Taffs ridden by Davy Russell on the way to victory in The Hillhouse Quarry Handicap Steeple Chase at Ayr. Photograph: Jeff Holmes/PA

There are three days of flat racing calm before next week’s Punchestown’s National Hunt festival where officials are dreaming of a perfect season-ending storm to the battle for the trainers’ championship between Willie Mullins and Gordon Elliott.

“It brings an added element we haven’t had here for a long time and wouldn’t it be ideal if it came down to the last day, the mares champion hurdle, and a match between Annie Power and Apple’s Jade,” said Punchestown’s racing manager Richie Galway.

With just five days of Punchestown to go, Elliott’s prizemoney haul of just over €4 million for the season so far gives him a lead of almost €400,000 in his pursuit of a first trainer’s title.

He remains long odds-on to prevent Mullins securing a tenth championship in a row but the title-holder has been backed into 100-30 in recent days and Punchestown could yet provide a decisive swing his favour.

“Last year Willie won almost €900,000 in prizemoney here. Gordon won €150,000. I know circumstances have changed but it’s still all to play for and the first day on Tuesday could be crucial.

“If Un De Sceaux wins, and Melon beats Labaik, then that would be a couple of hundred thousand of a turnaround in just one day,” added Galway.

Ground conditions at Punchestown are currently “good” and “good to yielding” in places. Watering is set to continue over the weekend with the intention to keep the going just on the slow side of good.

The weather outlook for Ireland’s richest National Hunt festival is for some showers and for colder temperatures.

Co Dublin trainer Patrick Griffin has both Portrait King and Man With Van lining up in Saturday’s Coral Scottish Grand National and they will be joined in the Ayr feature by Fine Rightly from Stuart Crawford’s Co Antrim yard.

The Irish trio are among the outsiders for a four-mile marathon which sees last year’s winner Vicente attempting to bounce back after his first fence fall in the Aintree National.

Scotland’s most valuable race shares centre stage in Britain with Newbury’s classic trials which have Aidan O’Brien’s pair, War Secretary and Rain Goddess, lining up in the Greenham and Fred Darling Stakes respectively.

In contrast it is flat racing for three days in a row in Ireland with the Ascot Gold Cup hero Order of St George undoubtedly the star performer as he makes his seasonal debut in Sunday’s Group Three Coolmore Vintage Crop Stakes at Navan.

The 2015 dual-Leger winner bounced back from a shock Curragh defeat to run a fine third to his stable companion Found in last October’s Arc, the sort of class that already makes him a general 5-2 favourite to retain his Gold Cup crown in June.

John Oxx runs Red Stars in the Vintage Crop and he also has an interesting runner in the Listed Salsabil Stakes, a race which two years ago saw a pair of subsequent Group One winners, Pleascach and Diamondsandrubies, having to settle for minor honours behind Bocca Baciata.

Bengala upset the odds on her only start to date at Leopardstown and did it the hard way, coming from the back to beat Aurora Butterfly who opposes again. The Pivotal filly looked like she could only improve for that experience and she could earn possible classic consideration if successful.

Johnny Murtagh’s string have been running notably well this Spring and True Valour and Sister Blandina look to hold leading claims at Limerick on Saturday.

In other news, on May 8th the Turf Club’s Referrals Committee will resume examining reports of inspections at trainer Luke Comer’s premises earlier this year. The Committee heard evidence from a number of witnesses before adjourning on Friday as they attempted to establish if the prominent businessman has breached any rules.

Turf Club officials twice inspected Comer’s premises in January and noted a number of anomalies including how 13 of the 19 horses returned in training had various problems which required veterinary input, care and monitoring.

Earlier this month Comer was given a suspended six month suspension of his licence to train racehorses, and was fined €10,000, after he refused permission for Turf Club officials to inspect his yard in Kilternan in March. Comer later apologised to the officials involved.