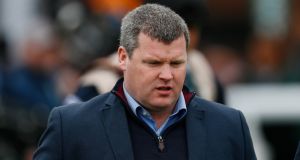 Gordon Elliott: roughly €390,000 clear of the reigning champion Willie Mullins in the trainers’ championship prior to the Punchestown Festival. Photograph: Jason Cairnduff/Livepic/Reuters

The typical Punchestown Festival is all about evaluating form from the earlier spring meetings at Cheltenham, Liverpool and Fairyhouse, looking for cases where it will be upheld and others where it will be reversed.

This is not your typical Punchestown however as it is less about horses than trainers, two in particular, Gordon Elliott and Willie Mullins.

That two men have given us the first meaningful trainers’ title race since 2007/8, the season when the current Mullins hegemony began, with Elliott roughly €390,000 clear of the reigning champion as things stand, the title decided on prizemoney rather than winners.

There is €2.7 million in available prizemoney over the five days of Punchestown so the lead is not unassailable though the bookmakers do rate the challenger a strong favourite.

On current odds, the implied probabilities less margin give Elliott a 78 per cent chance of winning with Mullins at 22 per cent to retain his title.

Those figures look to underrate Mullins’ chance and he is worth backing for a few reasons. Both trainers had six winners at Cheltenham, four of which will come here without a run in between.

The Mullins group of Un De Sceaux, Nichols Canyon, Arctic Fire and Penhill are more likely to return chunks of prizemoney than the Elliott quartet of Labaik, Apple’s Jade, Fayonagh and Champagne Classic; on the whole, they will be shorter prices for more valuable races.

Mullins could also run Annie Power and given his conservative campaigning of his horses, a peak effort or close to it can be expected as he will not run her otherwise.

There is also Mullins’ historical record at Punchestown to consider. At last year’s festival he won €846,800 against Elliott’s €193,475 which is supported by his overall record here since 2010. In that period he has had 81 winners with the next trainers on just 16 and Elliott with only nine.

The Mullins-Elliott battle has long been presented as a quality versus quantity dichotomy but this has not been the case at Punchestown where Mullins tends to run to vast numbers of horses, some 422 since 2010 which is more than four times as many as Elliott. That may change this season but the contrast is notable.

Despite so many runners, backing the Mullins horses blind at Punchestown has actually been profitable since 2010; if you had had a euro on each one at starting price in that period you would have made €37 profit.

With so many runners, the best way to approach this is to look for horses ridden by riders other than Ruby Walsh as his mounts can be overbet with punters surmising he is always on the right one.

That is often the case but even his winners are regularly the wrong price and betting those ridden by other riders (typically Paul Townend, Patrick Mullins, Katie Walsh or Danny Mullins) can offer value. This approach would have produced nine winners in 2016 and has been profitable overall this decade.

Aside from obvious yards, Enda Bolger and Jessica Harrington stand out as trainers to follow at Punchestown, both with 16 winners here since 2010.

The latter is the more interesting as the bulk of Bolger’s winners come in the uncompetitive banks races that make up too much of the programme here.

Harrington’s successes have come in the orthodox races, her runners producing a profit of €99 to a €1 bet since 2010 though one of those winners was a 50/1 shot. That said, she has a tendency to produce big-priced winners at the meeting with 10 of her 16 wins coming at 10/1 or bigger.

Furthermore, the trainer is coming into the meeting in peak form. Her excellent Cheltenham Festival has been well-covered by now but she has followed up through the spring with a flat treble at Cork last Saturday along with a wide-margin Irish National win for Our Duke on Easter Monday. Having a jockey riding as well as Robbie Power is just another plus.

He will be on Sizing John in the Punchestown Gold Cup on Wednesday and Cheltenham winners coming straight here have a fine record; since 2010, they have produced 19 winners from 40 runners with a small profit backing them blind.

The market is inclined to overrate their having had a hard race last time when what is more important is that they are simply the best horses. Ignoring the obvious seems to prove costly in this regard.

Aintree winners back up well too at Punchestown despite the shorter turnaround time, this group winning 13 times from 37 runners recently, though completing the triple peak effort required to win at Cheltenham, Aintree and Punchestown continues to be very difficult.

Both Douvan and On The Fringe did it last year though Sprinter Sacre was the only other horse to succeed of late and it is unlikely any horse will try this season, Defi De Seuil ruled out of such an attempt in the last few days.