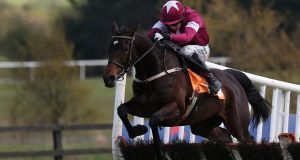 In pole for Punchestown: Apple’s Jade is being aimed at the three-miler or the mares’ race. Photograph: Brian Lawless/PA

Cheltenham heroine Apple’s Jade is set to spearhead a formidable team for Gigginstown House Stud at next week’s Punchestown Festival.

Gigginstown manager Eddie O’Leary said: “Apple’s Jade is obviously very, very good. I don’t think she’ll be running in the Champion Hurdle over two miles – she’ll either go for the three-miler or the mares’ race and we’ll decide in the next few days.”

Henry de Bromhead’s Petit Mouchoir, who was third behind the Nicky Henderson-trained pair of Buveur D’Air and My Tent Or Yours in the Champion Hurdle at Cheltenham, is set to run in the Punchestown Champion Hurdle on Friday week.

Elliott’s Outlander, who disappointed at Cheltenham, will bid to bounce back in the Punchestown Gold Cup next Wednesday and could be joined by fellow Gigginstown-owned chaser Sub Lieutenant.

The latter was runner-up in the Ryanair Chase at Cheltenham and in the Melling Chase at Aintree.

“There’s a small chance Sub Lieutenant will run and if he does he’ll go for the Punchestown Gold Cup,” said O’Leary.

“He’s a half-brother to Lord Windermere so I think he wants the longer trip.”

Of Gigginstown’s other leading Punchestown hopes, O’Leary added: “Tell Us More was just a bit sore on Monday so didn’t run in the Irish Grand National, but hopefully he’ll be back for the BoyleSports Champion Chase.

“Disko will go for the Growise Champion Novice Chase. We’ve got A Toi Phil, Attribution and Ball D’Arc in the Ryanair Novice Chase over two miles.

“I’m not sure yet who will be in there but it’s their last chance of the season so we’ll see how they all are.