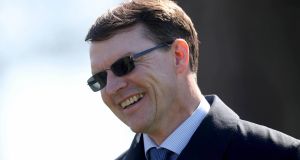 At Dundalk 10 days ago the Aidan O’Brien-trained Music Box was suspended from racing for 42 days under the “non-trier” rules after finishing third to her stable companion, Asking. Photograph: Donall Farmer/Inpho

It would be much easier if racehorses could talk. Then we could find out directly if they were trying to win. But since there’s even less chance of that happening than jockeys owning up to not-trying sometimes, regulatory decisions here still get entrusted to the eyes of Turf Club stewards.

They have long been caricatured as claret-soaked duffers half-heartedly policing their own, conveniently holding their binoculars back to front when it comes to anything that might raise a stink. It is an unfair cartoon to a lot of well-meaning people but is impossible to ignore.

But much more serious than any image problem over recent years has been the reduction to near junk status of the Turf Club’s credibility in imposing the rules of racing, turning the sport’s policing into little more than an exercise in optics.

Even for as conservative a sport as Irish racing, having the shop window of a billion-euro industry perceived as a regulatory free-for-all was unsustainable

So the miracle of the last couple of months is that the Turf Club finally seems to have stumbled on a way of making its running-and-riding judgments stick. And by just two words too: “Be Seen.” As in it is not enough for jockeys to try, they have to be seen to do so.

You would think this could always have been taken as a given. Ireland’s rule on “non-triers” was all but identical to other major racing jurisdictions. Around the world it continues to be a workable deterrent to those prepared to cheat. Here it facilitated a farce.

Because how do you technically prove intent to High Court standards when no one’s talking and all you have got to work on in response is essentially a judgment call?

The inevitable absence of such definitive proof, and a perceived horror by a cash-strapped Turf Club of going down the legal route against wealthy high-powered connections, reduced regulation to a flimsy fig leaf.

Racecourse stewards’ decisions were routinely appealed to the Turf Club’s Referrals Committee where a succession of high-profile penalties were thrown out as expensive lawyers picked up the easy money involved in introducing sufficient elements of doubt to inherently subjective cases.

It was the legal equivalent of shooting fish in a barrel. All sorts of material might be produced, from impartial expertise to veterinary evidence as well as tortuous discourses on the mysterious communicative bond between man and beast which is unreadable to civilians on the sidelines.

That the reaction of many was to automatically reach for their solicitor says plenty for litigious habits in Ireland. But then how much of that was down to the colossal success rate in the appeals system, one that inevitably left racecourse stewards wondering whether or not to bother any more.

However, even for as conservative a sport as Irish racing, having the shop window of a billion-euro industry perceived as a regulatory free-for-all was unsustainable. The wriggle-room that permitted sufficient legal doubt to flourish had to be curtailed.

So on January 21st, a new Rule 212 was introduced, a massive, clause ridden opus, believed to be masterminded by the Supreme Court judge, Frank Clarke, which basically boiled down to jockeys not only trying but being seen to try through the prism of what is termed a “reasonable and informed member of the racing public”. Finally stewards had something tangible to work with.

Its impact has been dramatic. There have been eight “non-trier” cases since its introduction. Three have been appealed. Just one of those appeals has been successful. Suddenly regulation has teeth.

Both the jockeys’ and trainers’ bodies have claimed the new regime panders to punters, a notably arrogant dismissal of those subsidising the show through betting tax and whose irrelevance within Irish racing’s funding model is perhaps the industry’s greatest weakness here.

Arguments about a supposed impact on horsemanship, overwrought portrayals of exhausted animals being whipped, not to mention the hoary old chestnut about common sense being forgotten, actually wind up validating the new rule because they highlight how low both standards and expectations had dropped.

It is those same low standards and expectations that left many predicting the Turf Club’s newfound zeal would only extend to those “little guys” without the clout to fight back.

But at Dundalk 10 days ago the Aidan O’Brien-trained Music Box, owned by Coolmore Stud, was suspended from racing for 42 days under the “non-trier” rules after finishing third to her stable companion, Asking. O’Brien was fined €2,000 and jockey Wayne Lordan banned for five days.

O’Brien called the penalties “bizarre”. The case will be appealed on Monday at Turf Club headquarters. There is hardly an operation anywhere on the planet with more clout than Coolmore and it is commonly regarded as ruling the roost here. So this is a critical test of the regulatory system.

It is entirely possible Music Box could not have finished closer than third at Dundalk. New evidence could emerge to indicate that. Since both sides are likely to be armed to the legal teeth there could even be extensive legal parsing of what constitutes a “reasonable and informed member of the racing public”.

At Dundalk, Lordan described his ride as “educational”. And inexperienced horses have to learn. Music Box appeared to step up when finishing runner-up at Leopardstown on Saturday. But education is secondary to the rules of racing and it is hard to argue that Lordan was seen to try very hard.

Prior to January, it is quite possible nothing would have been said or done about the Dundalk race, a sign of how bad the regulatory culture had got because by any reasonable criteria the Music Box run required examination.

It is going to get examined in detail on Monday. And so will the outcome. Irish racing is a small, tight-knit community. But it ultimately has to see a bigger picture in which more effective regulation benefits everyone. Because perception, and how the sport is seen by the racing public, is not irrelevant.