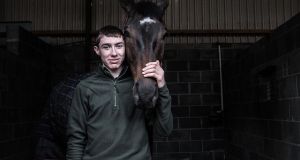 At 17 Ruby Walsh was studying for his Leaving Cert. Tony McCoy was only six weeks shy of 18 before he rode his first winner. Putting Jack Kennedy in context already requires comparisons with legends of the sport. That he can already put them in the shade illustrates just how rare a talent this particular 17-year-old is.

“I cannot think of any other jockey of that age – ever – who does what he does the way he does it,” says Conor O’Dwyer, a stalwart of the jockeys’ room for over two decades. “I can safely say I’ve never seen anyone so complete at 17. He’s a fantastic natural talent.”

Only referencing the more mercurial flat game allows some comparison to the astonishing speed of Kennedy’s progress towards the top of National Hunt racing.

Lester Piggott was a star even before winning the first of his nine Epsom Derbies at 18. More recently Jamie Spencer became a classic-winning jockey at 17. Frankie Dettori tasted success for the first time at 16 but it took seven more years before he was crowned champion.

Kennedy goes into next week’s Galway festival on top of Ireland’s jump jockeys’ championship. He was 17 in April.

It is only 14 months since he rode his first ever winner on a racecourse. It is just eight months since his first success over fences. It’s not so long since he was doing his Junior Cert. Now he’s the most in-demand jockey in the country, with the pick of most of the mounts at the hugely powerful Gordon Elliott stable.

It is a rate of progress that already has him earmarked as the heir-presumptive to a vintage generation of riders which also includes Barry Geraghty and Davy Russell.

Of course the reality is that Ruby Walsh has been taking it relatively easy at the start of the burgeoning new season, content to wait until the autumn when the vast strength of Willie Mullins’ battalions crank into top gear.

And it is the jump game’s nature to punish presumption, inevitable when the percentages insist it is when rather than if a rider gets hurt. That’s the head-melting reality of why the job of jump jockey is the hardest in sport. Despair is always potentially lurking at the other side of the next obstacle.

“He seems to be one of those riders that come along only once in a long, long time,” says Enda Bolger, the Cheltenham festival winning trainer who helped mould a young Ruby Walsh into the supreme big-race jockey of his generation.

“Ruby rode his first chase winner for me. He’d two years of riding in bumpers before turning professional when he was 18 or 19. But this guy has been thrown straight into the mix and has it all straight away. He’s the real deal.

“What I really like about Jack is that he’s equally as good over hurdles as he is fences. Ruby’s the same. But a lot of lads aren’t, even some of the other top fellas. From the inside you’d have a fair idea about that straight away. But there’s no doubt about Jack. He’s outstanding, destined for the top.

“He rode Gilgamboa for me in the Paddy Power Chase last Christmas. He was only a boy really, 16 and claiming 5lbs. But we had great faith in him. He didn’t win. But he was very good afterwards and able to talk us through what had happened,” Bolger adds.

It’s the sort of precocity that brings to mind for some the US prodigy Steve Cauthen who’d just turned 18 when Affirmed won the Triple Crown in 1978.

The season before that the youngster nicknamed “The Kentucky Kid” had been the first rider ever to win more than $6 million in a single season. That earned him another moniker, the “Six Million Dollar Man”, except he wasn’t even entitled to vote.

“The Kerry Kid” has a ring to it. But it’s unlikely to catch on. Irish racing doesn’t really do affectionate public nicknames, often preferring more privately biting ones instead. It also isn’t Kennedy’s way.

Those who have tracked his progress from being a three-time pony racing champion, recording over 280 winners, almost invariably describe the youngster as “laid-back,” and “very easygoing”.

The idea of instant success turning his head is dismissed. “Not that kind of young fella,” one trainer notes approvingly.

It’s only a couple of years since Billy trained the winner of the famous Dingle Derby with his son on board. Not for the first time, the “flapping” circuit has proved an invaluable education for a talented youngster with ambitions of becoming a professional jockey.

“I used to always try to ride a race,” Kennedy once recalled of his pony-racing days. “They were usually tight tracks, and you’d get lads who just wanted to get out in front no matter what. You mightn’t win if you tried to ride a race, but you’d learn a lot.”

Such a longer-term outlook was helped by his older brother, Paddy, also a jockey, who encouraged his sibling to link up with the hugely ambitious Elliott once school could finally be dispensed with.

The Gold Cup and Grand National-winning trainer quickly realised the new boy’s entitlement to claim a weight allowance was almost unfair. He spent the winter successfully exploiting it and even though that claim finished at the end of May – often a critical time for young riders – there has been no slowdown in momentum. If anything it has speeded up this summer.

Elliott has tried to play down expectations about his young prodigy, efforts which seem largely to be futile, but which appear to have been taken on board by Kennedy himself more than anyone.

“I don’t really set targets. I’m more day by day,” he says in the unflappable manner that has impressed many good judges almost as much as his actual riding.

“He seems to be a relaxed fella, easygoing, and that’s good. If you ride relaxed when the pressure’s on, that’s a big help,” says Charlie Swan, the former nine-time champion jockey.

“Everything seems to come naturally to him. He has it all. He’s a good judge of pace, can ride from the front or back, uses the stick left or right, is stylish, and horses run for him which is the hardest thing to put into words but he’s definitely got it.”

Identifying a precocious young talent on the way up, either human or equine, has always been one of racing’s most alluring features. In recent years, both Paul Townend and Jonathan Burke have generated plenty excitement. The anticipation around Kennedy appears at another level again though and he is drawing heady comparisons.

“No one doubted Paul’s riding ability. But the sort of fella he was he could have gone anywhere and done anything. Jack’s different, very level-headed. I’ve seen plenty of good young jockeys come and go quickly because they got too much too soon but that won’t happen with Jack.

“His family are lovely, salt of the earth people and the fact Paddy’s there will be a big help. Paddy will mind him. I’d say the safest tenner you’ll ever bet is that Jack will stay on the straight and narrow!”

The modern nature of racing’s top jobs is that they’re even more for the most powerful owners as for the top trainers. Kennedy already has winners for JP McManus and Michael O’Leary’s Gigginstown Stud. His sole winner to date around Galway’s trappy circuit came on the flat for Willie Mullins last year.

“Davy Russell, Barry Geraghty, Ruby Walsh, they all have about four or five years left in them. And by the time Jack is 21, because of riding for Gordon, and all the good spare rides too, he’ll have so much more experience than the other young guys. So he can only get better again,” Enda Bolger maintains.

The immediate focus is on seven days around Ballybrit where Kennedy is a novice around the trappy National Hunt circuit. He points out that Elliott doesn’t train specifically for Galway and with typical understatement says he merely hopes to “get on a few”. Perhaps the one festival certainty is that the youngster won’t be flustered.

“Galway is tricky but he’ll ride it with confidence. He won’t be sending them on down the hill and then getting caught. He’ll just poke away like Ruby and leave it late. It will be no problem to him,” predicts O’Dwyer.

It seems as safe a prediction as one that Enda Bolger uttered to Liz Kennedy after her son had ridden work at the Co Limerick trainer’s yard just before Christmas.

“I wanted him to get a spin on Gilgamboa before he rode him in the Paddy Power. His parents drove from Dingle up to Gordon’s in Meath to pick him up and then drive him down here,” Bolger recalls.

“That’s some dedication. And that’s the sort of family they are, to do that around Christmas time. I remember telling his mum that when Jack will be 25 or 26, he’ll be the one driving her around – and in a flash car too!”

Current evidence suggests that the only flaw in that theory is that 25 or 26 errs on the side of caution.