Talks on Dundalk track resurfacing timeframe appear to have stalled 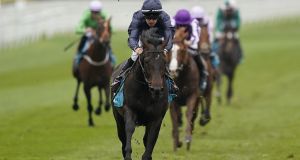 Talks between Horse Racing Ireland and Dundalk racecourse over a timeframe for the installation of a new surface at the country’s sole all-weather track appear to have stalled.

Dundalk’s Polytrack was heavily criticised during the spring with the Irish Racehorse Trainers Association indicating most of its member have lost confidence in the 12 year old artificial surface.

Many racing professionals have suggested the artificial track has lost ‘bounce’ and field sizes looked to shrink during Dundalk’s final meetings of its Spring programme.

In response track officials indicated that work on an almost €3 million resurfacing project would be completed in the summer of 2020 and that tenders for the job were issued last month.

However there has been criticism of that projected finish date with concerns raised about the potential impact on Dundalk’s extensive winter programme.

Earlier this month HRI’s chief executive Brian Kavanagh said it was possible resurfacing might be completed later this year instead.

Something of a vacuum looks to have developed on the matter with HRI still awaiting a response from the racecourse.

“We want it done as quickly as possible. The outcome of the tenders will determine how quickly it can be done. We understand the tenders were back on May 15th.

“It’s disappointing we haven’t had any response from Dundalk yet. I can’t shed any light on how things are going to progress because we can’t engage with Dundalk until next week,” Kavanagh said on Monday.

It is understood Dundalk’s chief executive Jim Martin is currently out of the country and won’t be back until next week.

Dundalk’s two summer fixtures have been cancelled and racing isn’t due to resume there until September 20th . It is due to host five meetings in October, seven in November and four more in December.

In other news, as expected Sir Dragonet has been supplemented into Saturday’s Investec Epsom Derby and is one of eight Aidan O’Brien-trained hopefuls left in flat racing’s ‘Blue Riband’ classic after Monday’s forfeit stage.

A total of 15 colts have been left in the race which could see O’Brien win for a record-equalling seventh time.

The Ballydoyle trainers options also include the Derrinstown winner Broome, the Lingfield Trial winner Anthony Van Dyck and Japan who returned to action less than two weeks ago at York.

The chances of a 21st winner trained in Ireland will also be carried in the 240th running of the Derby by Madhmoon, trained by 86-year-old Kevin Prendergast.

The other supplementary entry on Monday was the Dante hero Telecaster who, like Sir Dragonet, was added to the race at  a cost of £85,000 sterling.

The colt satisfied his jockey, Killarney-born Oisín Murphy, in a critical workout on Monday morning.

“The difficult part starts now– the next five days. By rights we should be waiting until Thursday [final declarations] to make a final decision but we don’t envisage any problems and if there were any doubts we wouldn’t have done it,” said Telecaster’s trainer Hughie Morrison.

“I’ll have five sleepless nights if I’m honest, worried that the horse might do something. He could stand on a stone or anything, it happens daily in every yard, so we’ll all be a bit nervous,” he added.

Tuesday’s Ballinrobe card sees the former Irish Leger victor and Grade One winning hurdler Wicklow Brave make his debut over fences at the age of ten.

Willie Mullins’s stalwart lines up in a Beginners Chase famously won in 2016 by the subsequent dual-Grand National hero Tiger Roll.