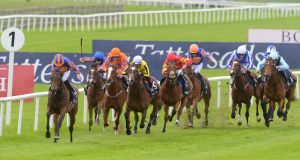 Hermosa and Ryan Moore on the way to winning the Tattersalls Irish 1,000 Guineas at the Curragh. Photograph: PA Wire

Hermosa provided a four-length classic show to mark the official opening of the new Curragh in Sunday’s Tattersalls Irish 1,000 Guineas.

It provided O’Brien with a record eighth win in the fillies’ classic and completed a Group One double for the O’Brien-Moore team after the 2-7 favourite Magical had earlier justified short odds in style in the Tattersalls Gold Cup.

Both quality performances put a seal on a momentous ‘Guineas Festival’ which attracted an official attendance of just 15,495 people over three days.

The Curragh chief executive Derek McGrath refused to give crowd figures for each of the specific days, which included Saturday’s 2000 Guineas success for the English runner Phoenix Of Spain.

“For the weekend the figure is 15,495. It’s a Guineas weekend – that’s the number we are giving. I have nothing else to say on that,” he said.

“It’s not about the attendance. It’s about what people do when they leave here and my ambition is that people walk out of there feeling that was a good experience and they will encourage someone else to come see it,” he added.

Such ambiguity about a straight-forward element to an €81.2 million capital development project, the largest in Irish racing history, and with €36 million of public money put into it, might charitably be put down to another of the teething problems the facility is experiencing.

If a reluctance to talk crowds isn’t new then the noise of wind eerily whistling through the spectacular new grandstand on Sunday was a novel one for racegoers.

On a not notably breezy afternoon a southerly wind produced a persistent racket that suggested a long line of Luas trams going past.

“It is to do with the perforations in the roof,” said McGrath. “It is one of the snags we have picked up and the architects are monitoring the noise and then the fix will come. It is just understanding it first.

“We had experienced it when it was being built but we thought it was because it wasn’t finished, so now we’re working on it,” McGrath said.

The Curragh boss insisted the issue can be fixed with acoustic engineers due to examine it further.

Coolmore Stud is one of the five founder investors in the new Curragh and both John Magnier and Michael Tabor were present for Sunday’s official opening and another superb Group One outcome for their team.

After Saturday’s 2,000 Guineas eclipse for Magna Grecia, normal classic service was resumed as Hermosa made most of the running to beat Pretty Pollyanna.

The 5-2 favourite will now try to secure a third classic in next month’s French Oaks at Chantilly.

“The plan was changed to come here rather than go for the Oaks, and then go from here to the Prix de Diane in three weeks’ time. I’m so delighted we did [\change plans],” O’Brien said.

Hermosa’s main market rival Qabala beat only one home and the English raider provided an abnormal scope after the race.

Magical once again beat her stable companion Flag Of Honour this season with a routine seven-length success in the main Group One support event.

She was subsequently cut to 4-1 for Royal Ascot’s Prince Of Wales’s Stakes although O’Brien was looking even further ahead.

“There is an autumn campaign and she has to have a break somewhere before maybe the Irish Champion and the Arc. Hopefully she’ll come out of today well and then we can think about Ascot. It’s all stuff to dream about,” he said.