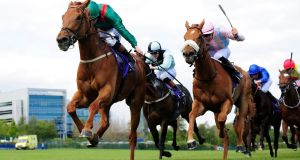 Chris Hayes on Baladiya wins the Walsh Associates Architects Maiden at Leopardstown Racecourse. Hayes was referred on after a fourth breach of the new rules when winning the Blue Wind Stakes on Tarnawa at Naas earlier this month. Photograph: PA

The Irish Jockeys Association (IJA) has warned a very significant problem could be coming down the road with new whip rules introduced six weeks ago.

The Irish Horseracing Regulatory Board (IHRB) brought in the new rules with provision for an automatic stewards enquiry once a jockey uses the whip nine times or more in a race.

That specific limit brought Irish racing into line with other major racing jurisdictions – including France where just five strokes are permitted – and came on the back of a 26 per cent increase in whip rule breaches in 2018.

The move has seen a spike in whip penalties and up to Tuesday there have been 102 whip offences since the new IHRB rules were introduced on April 8th – 40 of those cases have resulted in suspensions.

The IJA has been sharply critical of the new mandatory enquiry system from the start and the issue is likely to come under focus on Thursday when classic winning jockey Chris Hayes appears before a Referrals Committee hearing.

Hayes was referred on after a fourth breach of the new rules when winning the Blue Wind Stakes on Tarnawa at Naas earlier this month. The filly was found to be marked after the race.

Under the new regime all riders started off with a clean slate for their use of the whip. As per the rules Hayes was cautioned for his first offence. He subsequently picked up two penalties on one day at Gowran, first getting a one day ban and then two days.

The new system sees jockeys automatically referred when breaching the rules four times or more in a 12-month period. A minimum six day suspension is imposed in such circumstances.

IJA secretary Andrew Coonan said on Tuesday that jockeys are “genuinely perplexed” about how to handle the new whip rules. He also fears the Hayes case could be the first of many to come.

“Potentially we have a very serious problem coming down the road. We are potentially walking into a situation where the punishment is hugely in excess of what the offences may be.

“I’m very clear that the protection of horses is hugely important and there’s a way to do that professionally. But simply handing out lengthy bans can lead to a situation of excessive penalty and significant unfairness,” he said.

Hayes has said his first three penalties under the new rules were for going one over the eight-stroke limit. He also stressed last week the difficulty of adjusting to the new regulations after 18 years riding.

Coonan pointed to the likelihood of Hayes getting a minimum six-day suspension on Thursday as evidence of an inflexible system.

“The difficulty as I see it is when you have now have mandatory imposition of penalties, such as an automatic six-day suspension in a fourth offence, any discretion is removed from a panel (of stewards) with regard to previous offences.

“If any of those previous offences are minor transgressions, for instance one strike more than the permitted level, a jockey is now guaranteed to be deprived of six days of making his livelihood.

“In very few walks of life can you say to someone I’ll take six days wages from you without that being a result of very serious and significant rules breaches,” he said

“It’s trite to says riders simply have to count because the array of offences that riders can break, all of which lead to a penalty, are such that they can readily fall foul of the rules without having excessively used the stick. It’s causing significant concern. Riders are genuinely perplexed how to handle the new rules,” Coonan added.

The last of Hayes’s suspension dates from Gowran means he misses Wednesday’s Cork action where Dermot Weld introduces a classically bred newcomer, Azwah, a daughter of the 2010 Guineas heroine, Bethrah, in a maiden.