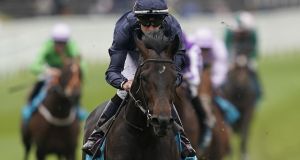 Aidan O’Brien’s wealth of classic talent was underlined on Sunday when the champion trainer didn’t rule out his Derby favourite Sir Dragonet bypassing Epsom in 12 days’ time and instead lining up in the following day’s French Derby.

On the back of a series of major trial victories O’Brien has a firm grip at the top of the Epsom betting as he pursues a record-equalling seventh English Derby victory on Saturday week.

Sir Dragonet has headed betting lists since his Chester Vase victory earlier this month despite needing to be supplemented into the race. However that O’Brien has indicated any supplementing for the son of Camelot might yet be into the Prix Du Jockey Club, a race the Irishman has never won.

“He’s not entered for either race and will have to be supplemented whichever races we decide to go for,” he said. “A a decision as to which Derby he’ll be supplemented into will be left as late as possible. The horse is well and we’ll keep talking things over before making a call.”

In the meantime, O’Brien confirmed Magna Grecia is on course to try to become the 10th horse to complete the English-Irish 2,000 Guineas double at the Curragh on Saturday.

The three-day Guineas Festival programme begins on Friday evening and is the first major test of Irish racing’s new €80 million facility due to be officially opened at Sunday’s Tattersalls Irish 1,000 Guineas programme.

The €400,000 Tattersalls Gold Cup is a third top-flight prize up for grabs at the weekend. O’Brien has pulled off the Group One hat-trick twice before in 2008 and 2011 and appears set to saddle the favourites for all three.

At Naas on Sunday the in-form champion indicated Magical will tackle the older-horse race while his Newmarket Guineas winners, Magna Grecia and Hermosa, are on target to bid for classic doubles.

“The colt [Magna Grecia] and the filly [Hermosa] seem fine and everything’s gone well with them so far,” O’Brien said on a day billed as a “Royal Ascot Trial” programme when Naas’s own new grandstand was officially unveiled.

In its near 100-year history Naas has got a reputation as “Punters’ Graveyard” and it looked like striking again for much of the four-runner juvenile contest eventually won by O’Brien’s Pistoletto.

The 1-5 favourite looked in serious trouble from after halfway as Red Epaulette threw down a sustained challenge.

Ryan Moore ultimately got Pistoletto home by a length but it initially appeared unimpressive enough for 14-1 quotes about next month’s Norfolk Stakes to appear.

However, at the start the colt was taken out of the stalls before being reloaded and his trainer explained afterwards: “He banged his hip going into the stalls and then got upset and kicked off both his back shoes.

“There are plenty marks on his back legs so he did really well. It wasn’t a good experience for him. All being well he’ll go to Ascot. We thought he’d win easier but there are plenty of reasons for it.”

It was the first leg of an O’Brien four-timer that included a win in the Group Three Coolmore Fillies Sprint Stakes although with his 12-1 newcomer Etoile rather than the disappointing odds-on favourite So Wonderful.

The latter struggled home in fifth as Seamus Heffernan guided Etoile through to by half a length from Peace Charter at 12-1.

“She’s a work companion of the other filly and first time out it was a big ask so it was a good performance. You’d imagine there will be plenty improvement,” O’Brien.

Etoile was given 5-1 quotes for Royal Ascot’s Albany Stakes afterwards.

Ryan Moore had better fortune in the Group Three Lacken Stakes as the 9-10 favourite So Perfect came through in comfortable style from Gustavus Weston.

The Commonwealth Cup is So Perfect’s likely Royal Ascot target and Moore was also on the last leg of O’Brien’s four-timer as Ferretti proved half a length too good for the favourite Giga White in a handicap.

Over jumps Davy Russell landed a superb success in French racing’s version of the Cheltenham Gold Cup when Carriacou landed the €825,000 Grand Steeple-Chase de Paris at Auteuil on Sunday.

Russell, a Cheltenham Gold Cup winner in 2014 on Lord Windermere, partnered the winner for Isabelle Pacault who became the first woman to train the winner of France’s most valuable jumps race.

Willie Mullins failed in his bid to add the race to his victory with Benie Des Dieux the previous day in the French Champion Hurdle. Burrows Saint did best of his five runners in fifth.