New grandstand at HQ to be officially opened on Sunday by the Taoiseach, Leo Varadkar 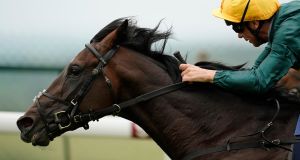 The Curragh authorities are promising a new dawn for Irish racing’s HQ although it is classic veteran Frankie Dettori who could wind up providing star-power to Saturday’s Tattersalls Irish 2,000 Guineas.

A quarter of a century after landing his first Curragh classic on the Derby winner Balanchine, the 48-year-old Italian jockey once again has a chance to be centre-stage on a momentous ‘Guineas Festival’ weekend.

Confirmation of last year’s European champion juvenile Too Darn Hot’s participation in Saturday’s colts classic has invigorated a contest that had looked destined for Magna Grecia.

Not only that but on Sunday the famously flamboyant Dettori also has an opportunity to fill in the one remaining gap on his Irish classic CV when teaming up with Pretty Pollyanna in the 1,000 Guineas.

His presence is a timely boost for the Curragh which will see Taoiseach Leo Varadkar officially open its spectacular new grandstand at 3.00pm on Sunday.

An exploratory first test of the new facility earlier this month threw up snags, and criticism such as inadequate facilities for owners and trainers. So the first classics of 2019 are a vital test of the redevelopment.

That was referred to on Friday by top trainer Ger Lyons who said he wants the track to adopt a more friendly approach, making customers feel wanted as opposed to being made to feel like trespassers .

“There is no room in Irish racing for a two-tier system and that approach has to become a thing of the past,” Lyons wrote in his blog.

Given curiosity value alone, an official attendance of just 3,650 for that meeting less than three weeks ago was disappointing and puts renewed focus on an infrastructure designed to cater for up to 30,000 customers.

The Curragh management’s publicity push has included the urge for people to ‘experience the new dawn’ at the historic track which has been revamped on the back of private investment and over €30 million of State funds.

So Too Darn Hot’s surprise 2,000 Guineas inclusion at least prevents any sense of ‘business as usual’ for Aidan O’Brien’s Ballydoyle team.

Ireland’s champion trainer is seeking a 12th win in the race and Magna Grecia had been odds-on to become the tenth colt to complete the Newmarket-Curragh Guineas double.

Now it’s uncertain whether he or Too Darn Hot will start favourite for the first of three Group One races run over the weekend.

O’Brien’s four chances to secure a record eighth 1,000 Guineas success include another double-seeking star from Newmarket, Hermosa, while Magical looks a long odds-on standout for the Tattersalls Gold Cup.

European racing’s dominant trainer has twice before completed the top-flight weekend hat-trick and will be a short price to do it again if Magna Grecia, or any of his five-strong team, can land Saturday’s colts classic.

If Magna Grecia looked to get the best of any draw or pace bias, or both, at Newmarket he was ultimately an authoritative winner under Donnacha O’Brien.

Like Hermosa a day later, Ryan Moore was on the ‘wrong one’ of Ballydoyle’s team on that occasion but he’s back on Magna Grecia this time with O’Brien Jnr on Mohawk.

That one’s presence could be significant considering he’s dropping in trip from the Dee Stakes as Magician successfully managed in the 2013 Guineas.

However it is Too Darn Hot and Dettori who may prove the spanner in any hat-trick works.

A setback ruled the brilliant Dewhurst hero out of the Newmarket Guineas and, after losing his unbeaten record in last week’s Dante, a return to a mile at Royal Ascot had been pencilled in.

However just nine days later Too Darn Hot gets a shot at classic glory.

“He’s got a great constitution and he wants to race. It’s a long wait from the Dante to Ascot and I thought he would get fresh and frustrated so we decided to let him race,” trainer John Gosden explained.

Dettori has twice before won the colts classic but so far failed to hit the 1,000 Guineas during his stellar career.

Pretty Pollyanna is officially top-rated for Sunday’s race on the back of a juvenile career which saw her land the Prix Morny.

She makes her first appearance of 2019 in the Guineas with prevailing doubts about her ability to last out a stiff mile like the Curragh’s.

“We feel there’s every chance of her getting the mile a bit better now she’s a year older,” said trainer Michael Bell. “We won a classic at the old Curragh [Sariska in 2009 Oaks] so now we want to win at the new Curragh as well!”

The supplemented Qabala and East, third in the French Guineas, complete the cross-channel challenge for the fillies classic.

Hermosa bids to become just the fourth horse to do the Newmarket-Curragh Guineas double. She will be reunited with Moore who finished sixth at Newmarket on Just Wonderful, albeit less than two and a half lengths off the winner.

Considering she was slowly away, and always looked to face an uphill task as a result, Just Wonderful’s effort was commendable. She has Donnacha O’Brien on her back this time and represents a decent chance of a fifth classic victory for her 20-year-old rider.