Too Darn Hot could provide Curragh with Dettori fillip 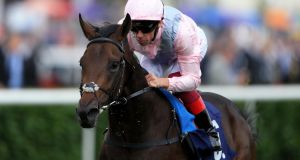 Frankie Dettori and Too Darn Hot could team up at the Curragh on Saturday. Photograph: Stephen Pond/Getty Images

Curragh authorities will keep their fingers crossed Too Darn Hot gets the green light to run in Saturday’s Tattersalls Irish 2,000 Guineas and brings Frankie Dettori with him.

The prospect of racing’s most flamboyant jockey bringing his renowned showmanship to the first Irish classic of 2019 would be a boost for a “Guineas Festival” which sees the €80 million Curragh redevelopment officially opened on Sunday.

The 1,000 Guineas and the Tattersalls Gold Cup provide an enticing Group One double-bill on that day. However, the chance of last year’s European champion juvenile Too Darn Hot being added to Saturday’s colts classic has invigorated a race that had looked set to give Aidan O’Brien’s Magna Grecia a Guineas double.

The Newmarket Guineas hero had been a heavy odds-on favourite to become the 10th colt to do the double. Too Darn Hot’s surprise inclusion at yesterday’s forfeit stage has reenergised the betting, though, with Magna Grecia an 11-10 market leader in some lists. Too Darn Hot was runner-up to Telecaster in last Thursday’s Dante at York after which trainer John Gosden immediately nominated a drop back to a mile for Royal Ascot’s St James’s Palace Stakes.

However, Britain’s champion trainer will make a decision later this week about a potential late change of plan.

Dettori has twice won the Irish Guineas in the past with the Godolphin pair Bachir (2000) and Too Darn Hot’s sire Dubawi five years later.

The one gap on the Italian superstar’s Irish classic CV is the 1,000 Guineas although Pretty Pollyanna could yet represent an opportunity for Dettori to fill it.

He had been booked to ride last year’s Prix Morny heroine in a classic trial last month only for Michael Bell’s star to miss the race.

Pretty Pollyanna is one of three cross-channel hopefuls among 11 fillies left in the classic. They include the supplementary entry Qabala who will get another crack at her Newmarket Guineas conqueror Hermosa this weekend.

Hermosa is one of five Ballydoyle hopefuls left in while Joseph O’Brien’s Fillies Mile winner Iridessa also looks set to take her chance.

Half the eight-strong Tattersalls Gold Cup entry are from Ballydoyle with Magical appearing a standout after wins in both the Alleged Stakes and Mooresbridge Stakes already this season.