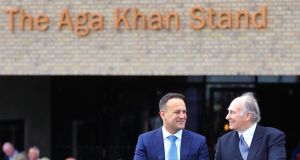 Horse Racing Ireland has clarified the final cost of redeveloping the Curragh racecourse, officially opened by the Taoiseach Leo Varadkar on Sunday, at 81.2 million, almost 25 per cent more than originally projected.

An original budget of €65 million, made up of private investors and state finance, was announced when the extensive redevelopment was announced in 2015. That budget rose to €72 million in 2017 and no official confirmation of costs was issued before Sunday’s opening.

When the Taoiseach formally opened the newly named Aga Khan stand at the official launch of the facility an accompanying official press release quoted him as saying: “The government, through Horse Racing Ireland, invested €36 million in this project, about 40 per cent of the total cost, because we recognised the significance of the Curragh to Irish society.”

Those figures suggested a final cost of €90 million although HRI’s chief executive Brian Kavanagh afterwards said the 40 per cent calculation was incorrect.

Kavanagh insisted HRI’s contribution was value for money for the State and that the budget overrun should be calculated from when the €72 million figure was reached when the tender process finished.

He suggested extra costs on such a extensive project were always likely and confirmed that fixing the parade ring, which had been too small to cater for big fields, cost €500,000 alone.

“The focus up to now has been on getting the development finished. We have work to do on engagement, but at least now you’re happy to invite people here,” Kavanagh said.

“We’ve had international racing visitors here who’ve been wowed by the place,” he added.

Sunday’s opening was attended by the Aga Khan, as well as the Minister for Agriculture Michael Creed, and featured a fly-past by Air Corps jets.