All British racing cancelled until next Wednesday at earliest 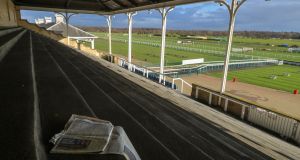 Terraces and stands remain empty after Thursday’s card at Doncaster was cancelled due to the equine flu outbreak. Photograph: Christopher Furlong/Getty Images

There won’t be any racing in Britain until Wednesday at the earliest due to the outbreak of equine influenza that brought the cross-channel sport to a dramatic halt on Thursday.

A trio of Donald McCain-trained horses, who had been vaccinated against the virus, tested positive for equine flu after having run at Ayr and Ludlow on Wednesday. The test results forced the cancellation of all four British fixtures on Thursday.

Up to 100 yards in Britain that had runners at the two meetings have been put in ‘lockdown’ by the British Horseracing Authority so testing can be carried out for the highly contagious disease.

They include the stables of the country’s top two National Hunt trainers, Paul Nicholls and Nicky Henderson.

On Thursday evening the BHA confirmed there will be no racing in Britain until next Wednesday at the earliest.

“The disease can take up to three days before symptoms are visible, meaning it will take until Sunday at the earliest before the BHA can gather all the information required,” a BHA spokesman said.

“This approach will allow samples be collected and assessed by the Animal Health Trust in order that a fully informed decision can be made on Monday.

“This may then allow declarations to take place on Tuesday in time for racing on Wednesday,” he added.

The move means the cancellation of four more British meetings scheduled for Friday and four others on Saturday, including the prestigious Betfair Hurdle programme at Newbury.

The BHA plans to reschedule key races, and those which may provide important opportunities for horses to run, during this period.

It means Irish racing will have the stage to itself in these islands in the coming days with Dundalk racing on Friday night, while Naas and Punchestown are scheduled for the weekend.

On Thursday morning Horse Racing Ireland and the Irish Horseracing Regulatory Board (IHRB) decided to go ahead with racing at Thurles.

That was despite seven Irish trainers, including Gordon Elliott, having runners at Ayr and Ludlow on Wednesday.

Those trainers were contacted that night and arrangements made for their horses to be diverted to isolation yards.

Elliott subsequently had seven runners at Thurles and his runner, Moratorium, won the feature event there for Michael O’Leary’s Gigginstown Stud at odds of 11-2.

Irish racing’s veterinary personnel have been aware that equine flu has been circulating in recent weeks. A case of the virus was reported in a vaccinated thoroughbred in an Irish yard last month and officials were satisfied it was contained.

Although Irish authorities have decided to continue racing, they also elected to stop taking entries for British based horses to run here.

That horses who tested positive had been given vaccinations was called “cause for significant concern” by the BHA.

The IHRB’s chief veterinary officer said, however, there are ways to manage yards affected by equine flu so normal business can continue.

“Equine flu is just like any other flu virus. It evolves and adapts and changes itself to beat the vaccinations. So the vaccines also need to adapt. Every so often there’s a gap between the two and that’s what seems to be what we’ve got here,” Dr Lynn Hillyer explained.

She also stressed the need for vigilance among trainers and vets in Ireland.

However, Hillyer added: “Our risk assessment right here, right now, even though we are on heightened awareness, hasn’t physically actually changed since this time yesterday.

“We have taken steps, thanks to the BHA reacting extremely quickly last night, to work with our trainers who were over there yesterday.

“We’ve made sure those horses are appropriately isolated and dealt with. That means racing in the rest of country really is at no more risk than it was yesterday.”

The impact of the racing shutdown in Britain included the share price of several gambling firms dropping on the stock exchange on Thursday.

Donald McCain is one of the leading trainers based in the north of England and a former Grand National winner. His father, Ginger, trained the legendary triple National hero Red Rum.

McCain said the origin of the infection in his horses is unclear but said he would never knowingly run a potentially infected horse.

“It follows we would never race any horses we could have known were infected.

“Over the last two months, all potential runners have been scoped and their blood checked within 36 hours of their races to ensure only healthy horses compete for the yard.

“When new horses arrive at our yard we, as much as possible, try to keep them separate. But at this stage we cannot know if the infection came from recent arrivals or from horses returning from racing,” McCain said.

“We have three confirmed cases and this morning have taken bloods and swabs from all the others for testing,” he added.