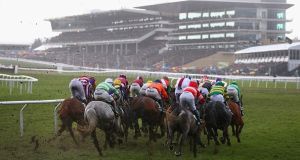 A view of the field as it enters the home straight in the Randox Health County Handicap Hurdle at the 2018 Cheltenham Festival. Photograph: Michael Steele/Getty Images

Course officials at Cheltenham are taking the highly unusual step of moving a fence to reduce risks for horses and jockeys at the Festival meeting next month.

One of the trickiest steeplechase fences at the home of jump racing will be moved, one of only two fences to be shifted in the past 20 years.

The second-last fence, which comes almost immediately after the final bend in races run on Cheltenham’s Old Course, has one of the highest faller-rates at the track, which has put it under a sharp focus at a time when racing’s record on equine welfare is under unprecedented scrutiny.

It was formerly positioned just before the bend but regularly caused fallers in that spot, including some horses who had seemed to jump the fence well but knuckled on landing, so it was moved into the home straight in 2010.

Course officials say that produced “a significant difference” in faller-rate but the fence has continued to provoke more than its share of drama. It was the fence at which Ruby Walsh broke a leg during the last Festival, when the classy Al Boum Photo fell beneath him. In a race for amateur riders in November three horses fell at the fence and one, Jameson, sustained fatal injuries.

Simon Claisse, the Cheltenham clerk of the course, said: “After October and November, listening to what the jockeys had to say, there was just a sense that, if they had a little bit more room after they straightened up, that may just give them a little bit more time to get balanced as they come off the turn.”

Claisse added that the reigning champion jockey, Richard Johnson, was “particularly keen that that could make a difference”. Moving the fence 10 yards up the hill, closer to the winning post and further from the bend, should give horses another two strides before they meet it.

That brings it closer to the final fence but Claisse is clear that the gap between the two will be sufficient. It will mean there is slightly less room for the start of the RSA Novice Chase, which is always between those two fences, but Claisse noted that race does not attract a large number of runners.

The decision to move the fence was made by Cheltenham’s management team and did not feature among the recommendations made by the British Horseracing Authority in its recent safety review, prompted by seven horse deaths at the last Festival.

“All the fences are always on our minds,” Claisse said, “because you’re going to have a faller-rating across 24 fences and so you focus on the ones at the top, inevitably. If you can make any minor adjustments that help things, then you do.”

He added that his team have been conducted a rolling programme of changes to fences at the track over the last two years with the aim of helping horses to see the obstacle as they approach. “We’ve been raising the guard rails, that’s the orange rail in the middle of the fence, just bringing that up a bit, bringing the bellies of the fences out, increasing the depth of the toe boards from nine inches to 12.”

There is a feeling among some racing professionals that Cheltenham was not given enough credit in the BHA’s review for the work it has done to promote safety in recent years, some of which has evidently gone undocumented. Claisse said his own figures for the course from April to New Year’s Day showed a fatality rate of 0.37 per cent, just below the national average of 0.39 per cent for jumps races.

“When you take isolated examples, like last year’s Festival, you can get spikes in these numbers,” Claisse said. “But we have to look at these things over a longer period of time.”

The outside world inevitably takes much more notice of what happens at the Festival than the rest of the year’s action at Cheltenham. Course officials hope their work will be rewarded with much less bad news to report next month.

1 Bartomeu resigns and drops bombshell of Barcelona joining European Super League
2 Robbie Henshaw likely to be the only Irish change for France finale
3 Ireland's centre will hold thanks to Henshaw and Aki’s midfield muscle memory
4 Rovers boss Bradley outlines Jack Byrne’s struggle with coronavirus
5 Cian Healy: ‘Realistically I got away with murder when I was younger’
Real news has value SUBSCRIBE