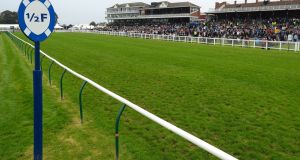 A general view of the main stand at Ayr racecourse in Scotland. Photograph: Mark Runnacles/Getty Images

British horse racing was plunged into a sudden crisis on Wednesday night as it emerged that three horses in an active yard, believed to be that of Donald McCain, have tested positive for equine influenza, despite having been vaccinated against it.

All four scheduled meetings in Britain on Thursday were summarily cancelled as the British Horseracing Authority moved hastily to try to contain the outbreak. It is not immediately clear when racing will be able to resume.

Alarmingly, the BHA confirmed that the affected stable, in Cheshire, had runners at Ayr and Ludlow on Wednesday, where they were in close proximity to dozens of other horses from many racing stables, including Gordon Elliott’s.

McCain is the only trainer who had runners at both meetings, suggesting that his stable is the one referred to by the BHA. Other trainers who had runners at Ayr or Ludlow include Paul Nicholls, Nicky Henderson and Elliott, who sent runners to Ayr from his base in Co Meath.

“It’s extremely worrying,” said Peter Scudamore, partner to Lucinda Russell, who had runners at Ayr. “I’ve never known anything like this in all my time in racing.”

An outbreak of the highly contagious respiratory disease caused turmoil in Australian racing in 2007, when all horse movements were banned nationwide for 72 hours, a ban that continued in some areas for longer. Sydney’s spring racing carnival was cancelled and it was months before the outbreak was contained and normal horse-related activities resumed.

Equine influenza is not usually fatal to healthy adult horses but is dangerous for young foals, mares in foal or horses who were already ill. BHA advice is that it can be transmitted by air “over reasonable distances”, or be passed from horse to horse by people who come into contact with them.

The BHA issued a statement shortly after 11pm, saying it had acted with the unanimous support of its industry veterinary committee, following confirmation of the positive tests by the Animal Health Trust.

“The fact that the cases have been identified in vaccinated horses presents a cause for significant concern over welfare,” it said.

“The full extent of potential exposure is unknown and we are working quickly to understand as much as we can to assist our decision making.”

A further statement is expected on Thursday.

The ruling body said it had been in touch with trainers who had runners at Ayr and Ludlow “to ensure appropriate quarantine and biosecurity measures are put in place and horse movements restricted to avoid possible further spread of the disease”.

Explaining the gravity of the situation, the BHA described equine flu as “the most potentially damaging of the respiratory viruses that occur in UK equines. Disease symptoms in non–immune animals include high fever, coughing and nasal discharge.

“The outbreak at the infected yard follows the identification of a number of equine influenza cases across Europe and the UK, including several in vaccinated horses. Following the recent outbreaks, guidance was sent to trainers to inform them that all horses which have not had a vaccination against equine influenza within the last six months should receive a booster vaccination, and that trainers should be extra-vigilant with biosecurity.”

There is one meeting scheduled in Ireland on Thursday, with the first race due to go off in Thurles at 1.15pm. Horse Racing Ireland have not made any statement on the outbreak in Britain yet.

The full statement from the BHA reads.

“The British Horseracing Authority (BHA), with unanimous support of the BHA’s industry veterinary committee, has taken the decision to cancel racing at all British racecourses on Thursday 7 February 2019. This is following the BHA being informed this evening by the Animal Health Trust of three confirmed Equine Influenza positives from vaccinated horses in an active racing yard.

“Horses from the infected yard have raced today at Ayr and Ludlow, potentially exposing a significant number of horses from yards across the country and in Ireland. The fact that the cases have been identified in vaccinated horses presents a cause for significant concern over welfare and the potential spread of the disease and the action to cancel racing has been viewed as necessary in order to restrict, as far as possible, the risk of further spread of the disease.

“The BHA has worked quickly to identify which yards could have potentially been exposed today and identify the further actions required. The BHA is presently communicating with yards potentially exposed to ensure appropriate quarantine and biosecurity measures are put in place and horse movements restricted to avoid possible further spread of the disease.

“The full extent of potential exposure is unknown and we are working quickly to understand as much as we can to assist our decision making. The BHA is working closely with the Animal Health Trust and will issue a further update tomorrow. We recommend that any trainer who has concerns about the health status of any of their horses should contact their veterinarian.”

Racing was, however, was set to go ahead in Ireland at Thurles on Thursday. An update on the track’s official Twitter account read: “Racing goes ahead as planned here today. First race off at 1:15.”

Equine influenza is a highly infectious disease of horses, mules and donkeys. Symptoms in non-immune animals include high fever, coughing and nasal discharge.