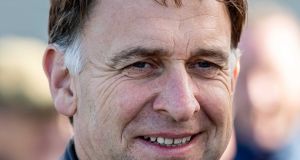 De Bromhead was commenting after the weekend’s Dublin Racing Festival saw 22 horses taken out of Sunday’s action at Leopardstown due to ground conditions that were good to firm in places on the steeplechase track.

De Bromhead took both Monalee and Balko Des Flos out of a decimated Unibet Irish Gold Cup, which had six of the original 10 runners declared non-runners because of the quicker than expected going.

The Co Waterford-based trainer insisted Special Tiara’s sad fate was a “freak thing that happened” and had nothing to do with the state of the ground.

Ryanair chief executive and champion owner, Michael O’Leary, said on Sunday that watering should have taken place on the run up to the €1.8 million festival.

However, De Bromhead does believe that Irish racing could experiment with the introduction of penetrometer devices, similar to the GoingStick in use in British racing, to help deliver more thorough information about likely ground conditions here.

Penetrometers work on the basis of measuring the depth of impression a weight makes in the ground. The GoingStick in use in Britain takes measurements in various parts of a track to give a consistent and objective measurement of the racing surface.

In Ireland going descriptions are supplied by the racecourse after personnel have walked the track.

Declarations for the weekend’s action were on Friday when the going description for Leopardstown’s chase track was given as ‘good’. By Sunday parts of the course had quickened to ‘good to firm’.

That lead to a torrent of non-runners including Delta Work, ante-post favourite for the Grade One Flogas Novice Chase.

“We seem to refuse pentrometers in this country. I wouldn’t like to have everything run off them either. But I think it is more information for everybody,” De Bromhead said on Monday.

“I know people say they can be inconsistent etc, etc [but] I think we should trial them at a few racecourses.

A spokesman for the Irish Horseracing Regulatory Board said on Monday that trials took place with penetrometers some years ago .

“I know they’ve been used in France for years and years but our clerks of the course found them to be inconsistent and prefer to rely on the old-fashioned stick,” he said.

De Bromhead was adamant his decision to take both Monalee and Balko Des Flos out of the big race was unrelated to Special Tiara’s sad fate the day before.

“Special Tiara generally loved that ground; it was just a freak thing that happened,” he said.

“I said all along that if it [the ground] was the same at Christmas I was going to struggle to run Monalee and I certainly wasn’t going to run Balko.

“And as much as people on the ground give a going description, the one group of people who can tell you what the ground is like is the jockeys who’ve ridden on it.

“We declared with a view to seeing what the jockeys said. They came in after the first hurdle race [on Saturday] and said the hurdles track was nice jumping ground.

“The first chase was Special Tiara’s race and the jockeys came back and said it was fast ground, good, good to firm in places,” De Bromhead explained.

The trainer withdrew his Arkle Chase hope Paloma Blue on Saturday and decided the safest option was to also withdraw both Monalee and Balko Des Flos a day later.

“I think Leopardstown were very unlucky. Racecourses are loathe to water their tracks at this time of year. I don’t know enough about watering tracks as to whether that’s right or wrong,” De Bromhead said.

“We were forecast a lot of rain. I checked my own forecast on the Wednesday and it said 24mms of rain at Leopardstown racecourse on Thursday. In Waterford we probably got an inch of rain. Then I got my text saying Leopardstown got 5mms. So it’s hard to balance it,” he added.

De Bromhead indicated that next week’s Red Mills Chase at Gowran, and a possible clash with Presenting Percy, will be strongly considered for Monalee while Balko Des Flos is likely to go straight to the Cheltenham Festival.