Leopardstown to examine winter watering after 22 horses taken out 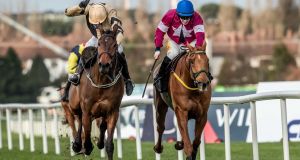 Ruby Walsh on Bellshill, left, takes The Unibet Irish Gold Cup on the line from Sean Flanagan on Road to Respect at the Dublin Racing Festival in Leopardstown. Photograph: morgan Treacy/Inpho

Although six of the 10 runners were taken out of the big race due to quick ground conditions, both Bellshill and the odds-on favourite Road To Respect provided a classic head-to-head finish.

Road To Respect came within inches of giving Michael O’Leary’s Gigginstown Stud another major Grade One after Apple’s Jade’s Irish Champion Hurdle romp a day before.

However Ruby Walsh conjured a final lunge from the 2-1 winner that carried the day by a short head and earned the horse a crack at next month’s Gold Cup in Cheltenham.

“A lot of horses didn’t turn up but still the quality horses were here,” Mullins said. “He’s always promised to be this good. Now he’s won his Irish Gold Cup and hopefully we’ll follow on – maybe next month!”

Bellshill was cut to 9-1 with some firms for the Cheltenham Gold Cup and could be joined by his stable companions Kemboy and Al Boum Photo who was one of those that skipped Sunday’s race.

Walsh and Mullins also secured Grade One success in the Chanelle Novice Hurdle with Klassical Dream rallying to beat his stable companion Aramon by a head.

The champion trainer did however take his two other runners out of that race due to the going and they were among 22 horses in all withdrawn on the day due to ground conditions that were ‘good to firm in places’ on the steeplechase track.

The state of the ground provoked plenty comment after the course passed a morning inspection called because of the threat of overnight frost.

During the week track officials had juggled various potential weather problems. Forecast levels of rain didn’t occur and then fears arose that freezing temperatures might impact the weekend’s action.

His brother, the Ryanair boss Michael O’Leary, echoed that on Sunday and indicated watering should have taken place as there was “almost a horse welfare issue” involved.

“Leopardstown may need to reconsider for next year, maybe they should have watered, it is the last jumps meeting of the year.

“You wouldn’t water here at Christmas, but the ground on the chase track isn’t safe. There were a lot of injuries yesterday,” he said. “These are unusual conditions but for the last jumps meeting of the year they should have thrown water on it,” O’Leary added.

For his part, Willie Mullins said he didn’t feel it is his position to talk to tracks about watering but did comment: “We’ve had a dry summer, a dry autumn and a dry winter. I’ve never seen anything like it. It’s a once-in-50-years weather situation.”

Leopardstown’s authorities confirmed they will examine if watering, even during sub-zero winter weather conditions, can be carried out in future if it is felt necessary.

Clerk of the course Lorcan Wyer said on Sunday: “I think it opens up a conversation amongst the relevant parties about watering in sub-zero conditions.

“The concept of watering in sub-zero temperatures doesn’t add up to me. It doesn’t seem quite right. But we will be having that conversation.”

He added: “It was a difficult forecast to work with. It got down to minus three and minus four on occasions during the week, including on Friday night.

“It’s an unusual situation and the ground is quicker than ideal. It’s primarily due to a dry summer, a dry autumn and the dry winter we’re having.”

Michael O’Leary indicated Apple’s Jade is likely to line up in the Champion Hurdle at Cheltenham after her superb success on Saturday.

“If we think she’s in the same sort of form for Cheltenham, and the ground isn’t like flint, it would be hard not to go for the Champion Hurdle,” he said. “We won’t make a decision until Cheltenham week. But I’d rather be beaten in the Champion Hurdle than the Mares Hurdle!”

O’Leary’s Delta Work skipped the Flogas Novice Chase due to the going and it was the top English mare La Bague Au Roi who emerged the winner under champion jockey Richard Johnson.

“The plan has paid off. I think it’s really important we come over and support a meeting like this,” said her trainer Warren Greatrex. “The Irish are so strong and to come over in their own backyard and win is great.”

Sunday’s other Grade One, the Tatts Juvenile Hurdle, proved the strength of Joseph O’Brien’s four year old team as Sir Erec made all to impressively beat his stable companion, Gardens Of Babylon.

Sir Erec is now as low as 5-2 favourite for the Triumph Hurdle.