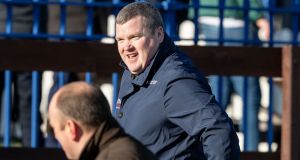 Irish racing’s chief veterinary officer has said the sport in Ireland is currently at no more threat of equine flu than it was yesterday.

All British racing was cancelled today after confirmation on Wednesday night of an outbreak of the highly contagious equine influenza virus.

Three positive tests were taken from horses that had been vaccinated, with trainer Donald McCain confirming on Thursday afternoon that the horses were from his Bankhouse yard in Cheshire.

The Grand National winning trainer had runners at both Ayr and Ludlow on Wednesday. A number of Irish trainers ran horses at both meetings including Gordon Elliott who had three winners at the Scottish track.

Once news broke of the positive tests, all the Irish trained horses who ran at Ayr and Ludlow were isolated. Elliott has confirmed his runners are at an isolation yard 25 minutes from his Co Meath stables.

“We’ve been told the chances of this affecting our runners from yesterday is very remote. But we can’t take any chances whatsoever and those horses that went to Ayr will be quarantined as long as they have to be.

“Hopefully everything will get back to normal in Britain as quickly as possible,” Elliott reported through a bookmaker blog.

Elliott declared seven horses to run at Thurles today which went ahead despite fears of the outbreak of equine flu spreading to Ireland.

However the Irish Horseracing Regulatory Board’s chief veterinary officer has said there is currently no impediment to racing continuing here.

Racing is scheduled for Dundalk on Friday night and at Naas and Punchestown over the weekend. However no entries are being accepted for horses trained in Britain.

“Our risk assessment right here, right now, even though we are on heightened awareness, hasn’t physically actually changed since this time yesterday,” Dr Lynn Hillyer said.

“We have taken steps, thanks to the BHA reacting extremely quickly last night, to work with our trainers who were over there yesterday.

“We’ve made sure those horses are appropriately isolated and dealt with. That means racing in the rest of country really is at no more risk than it was yesterday.

“But obviously in recognition of the position in Britain, and it is a rapidly evolving position, we are taking the position of stopping entries from Britain.

“It would be an unintended consequence obviously for an encouragement of horses movement at a time where we really don’t horse movement,” she added.

Hillyer added the IHRB had been aware of equine flu circulating in the last number of weeks and urged both vets and trainers to be vigilant for signs of the virus. She also said free swab tests are being carried out at the Irish Equine Centre.

All race horses in Ireland and Britain have to be vaccinated for equine influenza and the fact that the horses who tested positive had their vaccinations has been described as “cause for significant concern” by the British Horseracing Authority.

“Equine flu is just like any other flu virus. It evolves and adapts and changes itself to beat the vaccinations. So the vaccines also need to adapt. Every so often there’s a gap between the two and that’s what seems to be what we’ve got here,” Lynn Hillyer explained.

The IHRB’s senior vet indicated a similar shut down to the one in Britain today would occur here if there is an outbreak in Ireland.

With the Cheltenham festival due to start in just 33 days, there have been fears expressed about a possible impact on National Hunt racing’s biggest event if racing in Britain can’t resume.

Asked if the festival might be under threat, Hillyer said: “If we do everything right at this point in time you’d have to hope not.

“We don’t know what’s around the corner and to be honest the next 48 hours are going to be key. Diagnosis and analysis will be going on so that we get a better idea. We need to get a handle on it.”

Equine flu generally affects horses for up to 10 days and Lynn Hillyer dismissed disease comparisons to the foot and mouth outbreak which famously disrupted racing for almost two months in 2001. It also led to the cancellation of that year’s Cheltenham festival.

Australian racing was severely disrupted by equine flu in 2007 and it was month in some cases before the outbreak was contained.

“The big thing we’ve got here as opposed to Australia is that our horse population is vaccinated. That does two things. If limits the effects of the disease if they get it, and aids their recovery, but also reduces their chances of getting it in the first place.

“It’s also important to point out that if a yard has it that doesn’t necessarily mean, to use a horrible phrase, a shut down.

“There are ways to manage a yard so that there are safe areas and business can carry on as usual with other areas in isolation,” Hillyer explained.

A decision on whether racing can take place in Britain on Friday is not expected to be taken by the BHA until Thursday evening. British racing’s ruling body are awaiting further sample and test results.

“We will endeavour to issue regular information, but we are still in the early stages of assessing the scale and severity of the outbreak,” a BHA statement outlined.

“We are working quickly to identify the extent of the infection and will have more information when further test results are returned today. The results from those tests will not be known until this evening.

“Following these results being known, a call will be convened to discuss the implications, and a decision will then be made as to the impact on racing in the coming days.

“We are aware that people want to know the situation as regards racing tomorrow and this weekend, and we will seek to provide more clarity as soon as we are able.

“It is likely that any definitive decisions on whether racing can take place tomorrow will be taken later this evening,” it added.