Sizing John unscathed despite falling on return to action 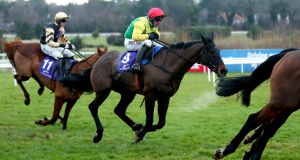 Sizing John came out of his Punchestown reappearance unscathed despite falling three out. Photograph: James Crombie/Inpho

Cheltenham Gold Cup hero Sizing John suffered a fall on his long-awaited return to action as Irish Grand National winner Burrows Saint dominated from the front in the Bet With Tote At Punchestown Hurdle.

Sizing John completed the rare treble of the Irish Gold Cup at Leopardstown, the blue riband at Cheltenham and the Punchestown Gold Cup in the first half of 2017.

However, although he made a flying start to the following campaign in the John Durkan, Jessica Harrington’s gelding disappointed at Leopardstown over the Christmas period that year and injuries have kept him off the track ever since.

He was a 4-1 chance on his first competitive appearance in 733 days — and was in second place when crumpling on landing after jumping the the third flight the finish.

Sizing John soon rose to his feet and galloped on riderless, while rider Barry Geraghty was also quickly up.

Harrington reported her charge had emerged seemingly unscathed, saying: “Barry was delighted with him. He said he’d just come alive, he jumped the hurdle perfect and gravity took over.

“He’s going to be sore as that was a heavy fall. Hopefully he’s all right in the morning and we’ll see how he is before making any decisions.

“The Kinloch Brae and the Galmoy Hurdle are two options for him, but we’ll see how he is first.”

Geraghty added: “He felt great. He flew the third-last, but a stride after it he stumbled and didn’t get his landing gear out.”
Burrows Saint provided Willie Mullins with his very first Irish Grand National success last season and was 13-2 on his return to hurdling in the hands of jockey-of-the-moment Rachael Blackmore.
Blackmore steadily raised the pace in front and opened up a big advantage over the rest of the field racing down the back straight.
Following Sizing John’s exit, Burrows Saint was in a clear lead rounding home turn and galloped on strongly to score by three and a quarter lengths.
The winner’s stablemate Saglawy (7-4 favourite) made late gains to fill the runner-up spot, with Sayo and Stratum rounding off a one-two-three-four for the champion trainer.
Mullins said: “It was an enterprising ride and Rachael did what I asked her to do. She jumped out and galloped and the horse did it well. She said even when he was getting tired that when he saw a hurdle he wanted to gallop down to it. He loves jumping.
“That was a nice surprise as he wasn’t well treated by the conditions.”
He added: “Sayo jumped poorly early on. We are probably going to abandon his chasing career as he doesn’t like jumping and it took him a couple of hurdles to come right.
“Paul (Townend) felt Saglawy wasn’t going for him and didn’t enjoy it. Stratum stayed on and there will be more opportunities for him.”