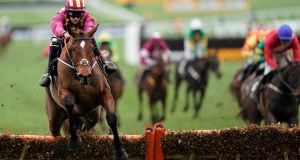 A Cheltenham Festival haunted by welfare fears endured a nightmare scenario on Friday when the Irish “banker” of the meeting, Sir Erec, was fatally injured in the JCB Triumph Hurdle.

The JP McManus-owned 11-10 favourite broke down badly just after jumping the fourth flight in a race eventually won by the 20-1 shot Pentland Hills.

Jockey Mark Walsh quickly pulled up Sir Erec and dismounted before screens were erected around the stricken horse. The decision to put Sir Erec down was made quickly by veterinary officials.

It occurred after the start of the race was delayed by almost five minutes when Sir Erec spread a shoe on his off-fore which meant he had to be re-shod.

The horse stood quietly while the farrier did the job and nothing appeared untoward as the race began. Sir Erec raced prominently and was in second place when the injury happened.

Trainer Joseph O’Brien indicated afterwards that the four-year-old colt broke down on the same off-fore limb.

Last week O’Brien reported that Sir Erec suffered a stone bruise in his preparation for Cheltenham but it was a minor issue that wouldn’t threaten his festival participation.

Sir Erec, like all the horses participating at this week’s festival, had to pass a British Horseracing Authority (BHA) veterinary test before getting the green light to run.

“He had a stone bruise during the week and we were very open about that. He had a full set of X-rays done, high and low, and a full set of scans two days ago.

“It was very obvious where the bruising was on his foot on the X-ray and he came perfectly sound the last couple of days. He did a trot-up this morning on concrete for the BHA inspections and passed that perfectly. Nothing was missed,” O’Brien said.

“He obviously lost a plate going to the start but that happens. Footballers break their legs. All sportspeople do. But unfortunately you can’t save a horse when they break their leg because they don’t allow themselves to recover.

“I’m devastated. JP is distraught, everyone is. But when you see what happened in New Zealand this morning, it puts a little bit of perspective on things.

“That might sound a bit cold to say but it’s a factual thing. It is the way it is. It doesn’t matter if it’s the best horse in the yard or the worst, it doesn’t matter.

“Mark said he didn’t jump the hurdle great, landed a bit awkwardly, and that was it,” O’Brien added.

“Putting a shoe on wasn’t going to cause that sort of injury. It’s one of those catastrophic injuries that occur unexpectedly. We are not able to predict those,” he added.

It was the Nico de Boinville’s partnered Pentland Hills that wound up winning the Triumph although celebrations were muted in the circumstances.

“You never like to win a race when that has happened. That is it the reality of the sport and it’s a tragedy for connections and everyone involved with Sir Erec,” de Boinville said.

The incident invariably cast a pall over the rest of a programme which saw Rachael Blackmore secure the first Grade One success of her career on the 50-1 Minella Indo in the Albert Bartlett Novice Hurdle.

Having won at the festival for the first time on A Plus Tard on Tuesday, Blackmore again successfully teamed up with trainer Henry de Bromhead for a shock victory over the favourite Commander of Fleet.

“I thought he was coming here with a right shout but you just don’t think it’s going to work out,” said Blackmore who is in second place to the Gold Cup winner Paul Townend in the Irish jockeys championship.

She is the third woman to ride two winners at a single festival, following Nina Carberry three years ago and Gee Armytage in 1987.