Wednesday’s Cheltenham card in danger of being blown off course 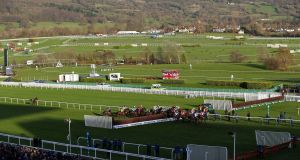 Runners and riders compete in the Close Brothers Novices’ Handicap Chase during the opening day of the Cheltenham Festival. Photograph: Nigel French/PA Wire

Whether day two of Cheltenham on Wednesday can go ahead or not will depend on an 8.0am morning inspection.

Forecast winds of close to 80km/h are predicted which could pose a threat to racing. If the card is cancelled it has been confirmed the it will be run on Saturday instead.

That will present a dilemma for many sporting fans who had planned to take in the Cheltenham Festival before going to Cardiff on Saturday for the Wales-Ireland Six Nations match.

The potentially decisive Six Nations encounter is due to kick off at 2.45pm on Saturday afternoon.

In 2008 powerful winds forced the cancellation of the day two programme. Eleven years ago the races were spread around and added to the Thursday and Friday cards. But the decision has been taken to move the fixture in total to Saturday if necessary.

The concern once again is the impact of high winds on temporary structures at the course and the potential dangers to the public.

Ian Renton, regional director for the Jockey Club, said on Tuesday: “Strong gusting winds are forecast for the area on Wednesday but their precise strength and location are not possible to predict in advance.

“We are currently looking at forecasts of gusts in excess of 45mph which present challenges out on the track and around the site, dependant on their direction.

“We remain optimistic and we will assess the situation in the morning, working with our team, forecasters, the British Horseracing Authority and our Safety Advisory Group in order to make a decision about whether racing goes ahead as planned.

“While our focus is to race tomorrow, should the weather conditions not allow this we would stage the whole of Wednesday’s card on Saturday.

“This would allow for all seven scheduled races to be restaged to provide participants with their opportunity to race at the festival and with originally advertised conditions which would not be possible in the two remaining days.”

In 2008 the final two days started at 12.30. Ten races were run on the Thursday with nine on the Friday.