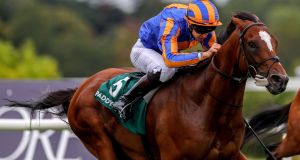 Ryan Moore will saddle Rostropovich in the Cox Plate in Melbourne on Saturday. Photograph: Inpho

Anyone depriving Winx of a fourth Cox Plate success in a row on Saturday faces widespread unpopularity in Australia but it’s a risk Aidan O’Brien is taking with Rostropovich.

Winx is a hugely popular sporting figure “Down Under” and is long odds-on to once again land Australian racing’s premier all-aged championship event which is worth $5 million.

Three Cox Plates from 2015-17 figure among her remarkable 28-race winning streak and she will tackle just seven opponents at the Moonee Valley track in Melbourne this weekend.

Despite the Cox Plate’s prestige they don’t include star three-year-old The Autumn Sun, whose owner, John Messara, recently declared: “I don’t want to be the one that shot Bambi – I would have to leave town!”

Public popularity has never appeared to matter to Ryan Moore though and he will team up with Rostropovich on Saturday. Godolphin’s Benbatl, a recent Group One scorer in Australia, is the other European hope.

Prior to Winx’s Cox Plate streak, Moore and O’Brien landed the 2014 renewal with Adelaide although Rostropovich appears to have a mountain to climb to replicate that.

The Irish Derby runner-up is among O’Brien’s likely team for the Melbourne Cup in less than a fortnight and only just clears quarantine restrictions in time to line up in the Cox Plate. The colt has drawn the widest stall eight around the famously tight Moonee Valley track and is a 16-1 shot in most ante-post lists for his first run in Australia.

O’Brien will be heavily represented in Group One action before that on Friday when US Navy Flag heads a team of four Ballydoyle runners in the $1 million six furlong Manikato Stakes.

Moore rides the July Cup winner while Oisín Murphy is on Spirit Of Valor. Emmet McNamara teams up with Intelligence Cross and top local rider Kerrin McEvoy is on Fleet Review.

This weekend’s Moonee Valley action continues the build-up to the Melbourne Cup on Tuesday week. Ireland’s champion trainer has the current favourite for the “race that stops a nation” in Yucatan.

More immediately it’s set to be a busy Group One weekend worldwide for O’Brien as his supplementary entry Magna Grecia has been installed a 7-4 favourite with some firms for Saturday’s Vertem Futurity at Doncaster.

Saturday also sees the Group One Criterium De Saint-Cloud i Paris for which O’Brien currently has nine entries including the Royal Lodge winner Mohawk and Circus Maximus.

The latter is among 21 entries left in Saturday’s Group Three Tote Eyrefield Stakes at Leopardstown, a race won last year by the subsequent Irish St Leger hero Flag Of Honour.

Dermot Weld has left both Zuenoon and Masaff in the Eyrefield and said: “Masaff is the more likely to run. He ran a lovely race in the Group Two on Champions Weekend and this looks a logical race to aim towards.”

In other news trainer Peter Fahey has successfully appealed penalties imposed under “non trier” rules at Tipperary earlier this month.

Gone Galavanting was suspended from racing for 42 days after running third in a mares maiden hurdle. Fahey was fined €2,000 and jockey Eric Roche banned for five days.

A Referrals Committee hearing allowed Fahey’s appeal and said exceptional circumstances were considered “namely that the horse was ridden the way she was due to the inexperience of the rider.”

There are just eight meetings left until the end of the turf flat season on Sunday week and Shane Crosse will hope to improve his chances in a tight struggle for the apprentice jockey title with four rides at Navan on Wednesday.

They include Recovery Road in an opening sprint maiden where riding arrangements suggest Captainofthebounty may be the one to beat.

Both Ballydoyle runners, and Dermot Weld’s hope Make The Switch, don first-time blinkers in the later mile and five maiden. They could have the most positive effect on Make The Switch.

1 Tipping Point: DeChambeau’s transformation raises questions, but who will ask them?
2 Pete Sampras: The forgotten great with the best serve in the business
3 Super Rugby AU offers glimpse of rugby’s future if law changes are adopted
4 Cam Newton broke the mould: Can his flame be rekindled at the Patriots?
5 Mental clarity in chaos: Novak Djokovic, the man who turned two into three
Real news has value SUBSCRIBE