Leicester bounce back with bonus-point win over Scarlets 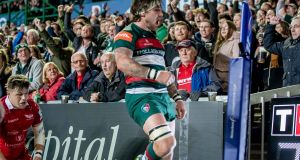 Leicester were dealt a blow before kick-off when captain Tom Youngs withdrew with illness, with Ford taking on the captaincy – and he gave his side the lead with a third minute penalty.

Tigers continued their impressive start with Tuilagi making a sharp break before Wells forced his way over from close range.

Ford converted but missed a long-range penalty as the visitors struggled to gain a foothold in the match, their cause not helped by the concession of frequent penalties.

However, Scarlets sprung to life when Halfpenny danced past a couple of defenders to put his side on the front foot before David Bulbring burst through to send Davies over for the try.

Halfpenny converted but was wide with a penalty attempt from inside his own half after hooker Tatafu Polota-Nau was penalised for not releasing.

Scarlets looked to have taken the lead when Thomson slid over the line to finish off a flowing move but TMO replays showed the flanker had lost possession.

The Welsh were not to be denied for long though as Halfpenny knocked over a simple penalty to bring the scores level.

At that stage, Scarlets were threatening to cut loose but the home pack rallied to batter their opponents with a series of powerful drives, which ended with Thompson outflanking the defence for Tigers’ second try.

However, Halfpenny responded with a penalty to leave the visitors trailing 15-13 at the interval.

Three minutes after the restart Ford extended the lead with his second penalty before Scarlets infringed at another scrum – with prop Wyn Jones receiving a long lecture from referee Romain Poite.

This time Ford kicked to the corner for Kalamafoni to crash over but Davies and Evans combined skilfully for Evans to score and bring the visitors back into contention.

Davies continued to cause Leicester problems with his elusive running as he beat two defenders to set up a try for Thomson, with Halfpenny’s conversion giving Scarlets a 27-25 lead going into the final quarter.

The visitors were only ahead for three minutes as Tuilagi battered his way over for a bonus-point try with Ford’s conversion and a subsequent penalty putting Tigers back into the driving seat.

A fifth try from May and a fourth penalty emphasised Leicester’s second-half superiority.