England players will play a maximum of 30 full games per season, reduced from 32 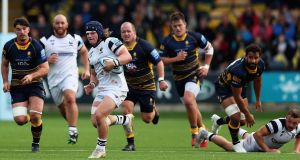 The Premiership season will end in late June for the three seasons beginning 2019-20 under a new structure announed by the Rugby Football Union on Tuesday.

Twickenham will host the finals on June 20th, 26th and 18th for the years 2020-22 with the campaigns starting on October 20th, September 12th and September 18th, respectively. Summer tours are to take place in July.

England players will play a maximum of 30 full games per season, reduced from 32, and be confined to a limit of 35 match involvements of 20 minutes or more. Other key changes announced include in-season breaks for players and a mandatory five-week post-season rest for all players.

RFU chief executive Stephen Brown said the new structure was a partnership between the RFU, Premiership Rugby and the Rugby Players’ Association and that it had focused “on the requirements of player welfare”.

Premiership Rugby chief executive Mark McCafferty said the structure achieved “a number of progressive goals for the English structure over the next three seasons, building in new player management approaches, reducing overlaps and scheduling more of Premiership Rugby for the better weather conditions of spring and early summer”.

RPA chief executive Damian Hopley said: “It is fundamental that players had their say in the shaping of this new season structure” and added that the new agreement “gives players guaranteed in-season breaks for the first time and reduces playing thresholds”. – Guardian service