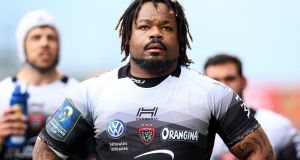 Mathieu Bastareaud: returns to the Toulon side for the visit to Edinburgh after serving a five-week suspension. Photograph: Gary Carr/Inpho

Injuries to Sam Skinner, Dave Dennis and Dave Ewers mean that Chiefs’ head coach Rob Baxter has promoted Ollie Atkins, Wilhelm Van Der Sluys and Tom Lawday to the team that drew with Munster last week. Castres lost narrowly at Gloucester last weekend and the French champions will be an even tougher prospect at home. They have made four changes, all in the pack. This could be one of the tightest games of the weekend but those three injuries could hurt the Chiefs in the pivotal forward battle.

Edinburgh coach Richard Cockerill makes one change to the team that so nearly engineered a fine away win to Montpellier with Jaco van der Walt replacing Simon Hickey at outhalf. Toulon’s Patrice Collazo has made nine changes and a couple of positional switches after last week’s shock home defeat to the Newcastle Falcons. Mathieu Bastareaud returns after serving a five-week suspension. Toulon, playing like a collection of individuals this season, may not find any respite from the disappointment in Scotland.

Wasps Dai Young has retained en masse the 23 that were hammered at the RDS last weekend and will be hoping to elicit a positive reaction from the group in front of their home fans. His Bath counterpart Todd Blackadder has also provided a vote of confidence to outhalf Freddie Burns by retaining him after last week’s shenanigans. The visitors are without Rhys Priestland, Jamie Roberts and Tom Dunn and that should tip the tie in the home side’s favour.

Saracens were typically hardnosed in prevailing in a feisty encounter in Glasgow weekend and Mark McCall has the luxury of rotating his squad against a French side that lost their opening game. Lions and Wales wing Liam Williams is among the players who come in but both Vunipola brothers, Mako and Billy are out injured. Lyon have some decent players in Rudi Wulf, Alexis Palisson and Jean Marc Doussain but they’re not likely to get enough ball and it’s difficult to see them troubling the home side.

Dean Richards has made three changes to the team that won away at Toulon, losing one Fijian wing Nemani Nagusa but it is balanced by the return of compatriot, the outstanding Verenki Goneva. Montpellier coach Vern Cotter has made several changes to the team that beat Edinburgh, the most eye-catching is leaving the du Plessis brothers, hooker Bismarck and Jannie back in France. Former All Black Aaron Cruden returns with Ruan Pienaar reverting to scrumhalf. The Falcons to soar once again.

Number eight Nick Williams and the club’s top try scorer this season Ray Lee-Lo are two of four alterations to the Cardiff team that won in Lyon as the European Challenge Cup winners of last season look to build on a superb start. Glasgow’s defeat at home to Saracens means that it is imperative that they get something out of this game. They’re missing Stuart Hogg terribly but the return of Tommy Seymour will give them more of a cutting edge.