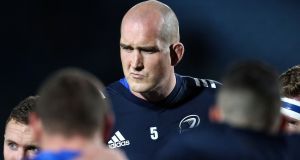 “Goal kicking,” deadpanned Devin Toner when asked to suggest an aspect of James Ryan’s development upon which the young Leinster and Ireland secondrow might be concentrating in seeking to develop further a prodigious talent, already in bloom.

It was just 12 months ago that Ryan (22) made his European debut for Leinster against Montpellier and in the interim he has won Heineken Champions Cup and Guinness Pro14 titles and a Grand Slam with Ireland.

There was further laughter when Toner was asked to appraise his young engine-room accomplice and whether he’d noticed an improvement in Ryan’s performances during that timeframe.

“Not really, he’s been brilliant since he started, anyway! Imagine how good he will be when he’s 30! “He’s an awesome player; he showed it again on Friday. He runs the best lines ever coming off nine and he’s able to break that first tackle. He’s just always getting up, always looking for more work and he has a big engine on him.

“He’s got a good few 80s [minutes] in a row under his belt and he’s a real asset for us as well as a pack because he’s really good at getting up and stealing [lineout] ball as well.

“Like I’m not going to say he’s the complete package. Everyone has stuff to work on. I’m sure he has in his own head. He has stuff written down, his goals and his aspirations. It’s all personal.”

At 32-years of age, Toner is playing the best rugby of his career. He’s had to because of the stiff competition he’s faced at provincial and international level for a starting jersey.

He didn’t begin the Six Nations matches against France and England, largely the first time in his 60-Test career – barring four of his first five caps when coming on as a replacement – that he wasn’t consistently part of the run-on team.

But he’s never been more comfortable in his playing skin. Leinster and Ireland’s on-field lineout tactician, he’s always had good hands in terms of his passing and a voracious work-rate; he has been adding little bits here and there.

“You hear it all the time, that secondrows get better as they get older, but for me it’s happened in the last year or two or three that I’ve come into my own and started playing well.

“I can’t put my finger on why it is; I haven’t really been doing much differently. It might be experience, getting to know what does and doesn’t work for me, what I do or don’t do well.”

Toner spoke about gleaning confidence from the players around him, from the systems that are in place and the constant repetition in training that fortifies the team in a match environment. Practice hasn’t made perfect but it’s been close occasionally.

Leo Cullen, Stuart Lancaster, Felipe Contepomi and John Fogarty have worked diligently both in terms of individuals and the collective to ensure that the players are comfortable no matter what the match situation.

Tadhg Furlong’s show, go and one-handed offload was a classic example of which there were numerous when counting the number of occasions that a Leinster forward was either first receiver, deputised as scrumhalf or was charged with working the ball to a distributor out the back.

On Sunday they go to Toulouse for a game against a club that has also won four Champions Cup titles. Toner didn’t play the last time the sides met, a 32-23 semi-final win for the Irish province at the Aviva Stadium; he was an unused replacement. The chance to play against a club that captured his imagination as a teenager is something he is looking forward to.

“They represented French rugby for me when I was 16, 17, 18 and looking to French rugby, the best at the time. And they’re a lot better this year then they have been over the last couple of years so they’re going to be a pretty big test over there. Obviously every French team is proud at home and they’re going to want to come out and come at us, come at the champions, as every team is going to want to do.”

Another day, another challenge, another opportunity, plenty for Toner to relish.

1 Pete Sampras: The forgotten great with the best serve in the business
2 Super Rugby AU offers glimpse of rugby’s future if law changes are adopted
3 Cam Newton broke the mould: Can his flame be rekindled at the Patriots?
4 Tipping Point: DeChambeau’s transformation raises questions, but who will ask them?
5 Mental clarity in chaos: Novak Djokovic, the man who turned two into three
Real news has value SUBSCRIBE