Fox Norton leads British challenge on day one at Punchestown 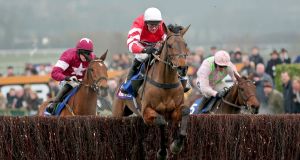 The 2015 Cheltenham Gold Cup hero Coneygree is set to arrive in Punchestown on Monday ahead of his eagerly awaited clash with the reigning ‘blue riband’ holder, Sizing John, in Wednesday’s Coral Gold Cup. Photograph: Dan Sheridan/Inpho

Fox Norton will lead British hopes on day one of Punchestown 2017 when taking on Un De Sceaux in the €250,000 Boylesports Champion Chase but track officials are anticipating a reduced overall cross-channel challenge this week.

UK-based horses won half a dozen races at last year’s festival and made a particularly significant impression in 2011 with eight victories.

However, on the back of a record-breaking 19 Irish-trained winners at Cheltenham last month, the number of likely runners travelling to compete at Punchestown looks set to be down.

“The reality is that Nicky [Henderson] is one of our biggest supporters and he is fighting out the trainers title with Paul [Nicholls]. He will have a team here but it will be down in numbers,” said Punchestown’s spokesman, Richie Galway.

“The 19 winners at Cheltenham, and the fact that Gordon [Elliott] and Willie [Mullins] are targeting the week so strongly, has possibly had an impact too.

“A lot of people are still waiting to make calls based on the ground so we may be down on numbers from Britain, although there will still be quality there,” he added.

The 2015 Cheltenham Gold Cup hero Coneygree is set to arrive in Punchestown on Monday ahead of his eagerly awaited clash with the reigning ‘blue riband’ holder, Sizing John, in Wednesday’s Coral Gold Cup.

The injury-plagued star doesn’t want ground conditions to get too fast and the going at Punchestown is currently good and good to yielding in places.

“The Bradstocks have told us if it’s on the slow side of good they’ll be happy and I’m sure they’ll have a good look at it when they get here.

“They’re fully aware we’ve had to water the ground and they’ll make up their own minds when they get here. But he’s an intended runner, they’re travelling and all being well they’ll be happy with what they find,” Galway said.

Philip Hobbs is another festival stalwart whose numbers are likely to be down this year and it will be Colin Tizzard taking the Grade One fight to the home team in particular on Tuesday.

Fox Norton found only Special Tiara too good in the Queen Mother at Cheltenham and reverts back to the minimum trip after an impressive victory over two-and-a-half miles in Aintree’s Melling Chase.

Tom George will run both last year’s winner Gods Own and Sir Valentino in Tuesday’s feature for which Un De Sceaux is a 5/6 favourite in some ante-post betting lists.

Robbie Power has opted for Fox Norton over Jessica Harrington’s Grand Annual winner Rock The World in the Boylesports but is set to stick with the local trainer in the Herald Champion Novice Hurdle.

Power marked his new job as number one jockey to Alan and Ann Potts by scoring on Pingshou at Liverpool and he is one of seven declared for the €100,000 two-mile contest.

However, Davy Russell has been pencilled in to ride him, while Power stays loyal with the mare Forge Meadow. Labaik and Melon – first and second in Cheltenham’s Supreme – top the betting.

Tuesday’s other Grade One is the Growise Novice Chase for which Michael O’Leary’s Gigginstown team have four of the seven declarations. They include Disko, who beat Our Duke in a Grade One at Leopardstown in February.

Ground conditions might be quicker than ideal for the wide-margin Cork winner Downforce but they’ll be fine for the topweight Ardhoomey who finished half a length in front of Washington DC in last year’s Flying Five.

However, Washington DC’s pipe-opener at Meydan last month could give him a crucial edge this time.

Harrington’s flat team have been in flying form so the lack of a run this season is unlikely to be an issue with Cloistered in the mile maiden. However, there was plenty to like about So You Thought’s Leopardstown debut and he should be tough to beat.

Split The Atom was in fine form in Dundalk recently and with Wayne Lordan doing 8.4 in the six-furlong handicap he looks worth a look.

1 Australian rugby staring into abyss as another crisis hits
2 ‘This is sick’ - seventh-tier Swedish club cancels friendly after betting mayhem
3 ‘Magnificent’ Conor Connelly remembered after sudden death
4 America at Large: On Long Island, longing for a return to our field of dreams
5 Ringrose set for new central deal; memories of Björn Borg at Wimbledon
Real news has value SUBSCRIBE