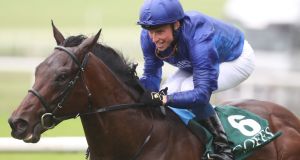 Pinatubo can confirm himself a horse for the ages with victory in the Qipco 2,000 Guineas at Newmarket. Photograph: Niall Carson/PA Wire

Into the unprecedented context of coronavirus comes this weekend’s centuries-old custom of identifying racing’s Classic cream of the crop.

They’re a month late and the expanse of Newmarket’s Rowley Mile will look even more bare with no one cheering. But these Qipco 2,000 and 1,000 Guineas will rarely have felt more reassuring.

Their role in identifying the best three-year-olds over a mile is always a defining early season characteristic.

But this time Saturday’s 2,000 Guineas might even end up being recalled in singular terms for more than just the pall of Covid-19.

Pinatubo, the little colt named after a Philippine volcano, comes to the Guineas as the highest rated two-year-old champion for quarter of a century.

Unbeaten in six starts, Godolphin’s star put up a juvenile performance for the ages when winning the Curragh’s National Stakes by nine lengths last September.

It means the official handicapper rates him over a stone clear of any of his 14 Classic rivals. Even if he hasn’t progressed from two to three, Pinatubo could still be far enough ahead of them to win.

If he has progressed, and, whisper the thought, maybe even improved with maturity, we could be about to witness the flowering of a rare Classic talent such as Nijinsky, Sea The Stars or Frankel.

However Guineas history is littered too with precocious talent that failed dismally to live up to such billing.

In 2016 Air Force Blue started odds-on and beat just one home. Famous names of the past such as Apalachee testify to the danger of investing too much too soon in potential.

Air Force Blue’s trainer Aidan O’Brien has saddled the last three winners and has four chances on Saturday to become the first in over 180 years to land a Guineas four-in-a-row.

Frankie Dettori teams up with Wichita which leaves Arizona as the stable No 1, although both couldn’t get the better of Pinatubo in the Dewhurst last October.

O’Brien’s record 10 Guineas testifies however to how he can get it right on the day that counts. Whether he does again, or whether Pinatubo really might be the real thing, makes it a Guineas to savour in any context.

For many the same will apply on Sunday, in particular should Jessica Harrington win a first English Classic in the 1,000.

Her Cheveley Park winner Millisle is top-rated but tackles a mile for the first time against O’Brien’s Love and the big home hope, Quadrilateral.

Britain’s champion jockey Oisín Murphy takes the ride on Millisle and, like Harrington, goes into the weekend pursuing a first English Classic.