Science shows that sports events going ahead was ludicrous 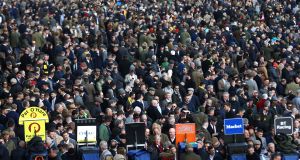 These scenes at Cheltenham were happening during a global pandemic. Photo: Michael Steele/Getty Images

Now we know. The much-maligned decisions to go ahead with the Cheltenham Festival and Liverpool’s Champions League match against Atlético Madrid in March “caused increased suffering and death”, according to the scientist leading the UK’s largest Covid-19 tracking project. Well, colour all those who foresaw that particular revelation coming down the pipe surprised.

In much the same way that you don’t need to be an optician to appreciate that loading the family into the car for a 60-mile pre-journey journey is not the best way to test your eyesight, an intimate working knowledge of Bunsen burners, pipettes and Erlenmeyer flasks was never going to be a prerequisite for forecasting that hundreds of thousands of sports fans rubbing shoulders in close proximity during a pandemic would result in unnecessary illness and fatalities.

It now seems beyond much doubt that since Liverpool last played a match, their game against Atlético added to an excess UK death toll that has now risen well above Anfield’s 54,074 capacity. Sadly, it cannot be proved beyond all doubt and it is this lack of total certainty those responsible for not just allowing but encouraging people to attend these mass gatherings have chosen to cling.

Let’s hear what they have to say. “There are many factors that could influence the number of cases in a particular area, including population density, age, general health, and the position of an area on the pandemic curve,” said a government statement issued to BBC Radio’s File On 4 – Game Changer, its author apparently affronted by the very notion that cramming 250,000 punters on to a provincial racecourse across four days for a glorified booze-up may be among the more obvious ones.

This official unwillingness to countenance the results of meticulous scientific research seems all the more galling when we recall various government ministers repeatedly using – you’ve guessed it – science of the weirdest variety as a shield with which to defend themselves against critics of what were quite obviously very bad decisions. Decisions taken, the government insist, on the back of “continuous consultation with scientific and medical experts”. Experts such as their own chief scientific officer, Patrick Vallance, who at the time was referencing the idea of herd immunity that could scarcely have been more ill-advised.

Speaking specifically about events in the Cotswolds and at Anfield, Tim Spector, professor of genetic epidemiology at King’s College London, said data collected from millions of volunteers revealed cases of Covid-19 “increased several-fold” in both areas and the reasons were abundantly clear. “Sporting events should have been shut down at least a week earlier,” he said. “Because they’ll have caused increased suffering and death that otherwise wouldn’t have occurred.”

Not content with having giddily boasted about shaking hands “with everybody” in a hospital on the same day his scientific advisers warned against doing anything of the kind, Boris Johnson’s presence at Twickenham for a Six Nations rugby match a few days later would go on to be cited by Cheltenham Festival organisers as one of the main reasons they decided to press ahead with four days of racing despite widespread public misgivings. At the time, the decision looked baffling. With the benefit of the kind of 20-20 hindsight you can only develop on a trip to Barnard Castle, it now seems insane.

This was back in the days before Johnson and his cabinet were portentously urging us to stay at home and save lives. In mid-March, assorted frontbenchers were whistling an entirely different tune, insisting mass gatherings in sporting amphitheatres were just what the doctor ordered.

“There’s no reason for people not to attend such events or to cancel them at this stage,” said the culture secretary, Oliver Dowden, in response to increasingly loud calls to call off Cheltenham and top-flight football, while the Tory MP for Tewkesbury, Laurence Robertson, was also extremely vocal in his support for the lucrative racing festival that takes place annually in his constituency.

“The disruption to people’s lives, and the risk to their livelihoods, caused by cancelling events and activities would be too great to justify [cancelling] at the moment,” Robertson said in the buildup. “This assessment would include the potential costs to local businesses in Gloucestershire, which would run into tens of millions, if the Festival were to be cancelled. This morning the chief medical officer endorsed this approach.”

A noted racing enthusiast who subsequently came under fire for failing to declare in time all of the £4,000 worth of hospitality he received over the four days of Festival, Robertson put his tardiness down to an oversight. This month he lost his father to coronavirus and on Tuesday said being unable to visit the 89-year-old in hospital as he fought for his life would “haunt me for the rest of my days”. The MP spoke out as he called on Johnson to sack Dominic Cummings for his well-documented lockdown escapades.

Robertson may or may not regret the enthusiasm with which he lobbied for his constituency’s annual cash cow in March, although his entirely reasonable pre-Festival caveat that “a change of policy would be introduced if the scientific and medical evidence points in that direction” suggests the personal grief he has since endured may have prompted regrets.

The current scientific and medical evidence appears to leave us in little or no doubt mass gatherings at major sporting events should have been banned much earlier, even if our leaders remain predictably unwilling to listen to the kind of independent expert testimony it doesn’t suit them to hear. – Guardian