Harrington confident Millisle can go the distance in English 1,000 Guineas 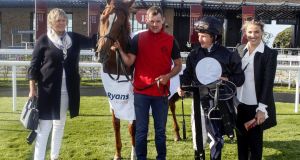 Jessica Harrington is confident stamina won’t be an issue for Millisle when she pursues English Classic glory in the Qipco 1,000 Guineas at Newmarket.

Last season’s Cheveley Park Stakes winner has never run beyond six furlongs in her five races to date and is set to tackle a mile for the first time in Sunday’s fillies’ Classic.

Millisle is third favourite for the race behind the unbeaten English hope Quadrilateral and Aidan O’Brien’s Love, both of whom are proven at the distance.

Victory would mean a hugely popular first English Classic for Harrington who has engaged champion jockey Oisín Murphy for the ride.

That is because regular rider Shane Foley would face an automatic 14-day isolation period on his return to Ireland if he travelled to Newmarket for the big race.

With another of Harrington’s Group One winning fillies, Albigna, favourite for the Tattersalls Irish 1,000 Guineas at the Curragh just six days afterwards, Foley has opted to stay at home.

On Tuesday Harrington played down the logistical impact of the 14-day isolation rules due to coronavirus, guidelines that apply to anyone entering the country, including stable staff.

“Someone’s going to drive her over and I have a lad who worked for me last year in Newmarket and he’s going to look after her while she’s over there. She will come straight back after the race.

“There has been movement of horses all through the whole thing. Mares and fillies have been going backwards and forwards every day of the week so it’s not exactly rocket science.

“I’m pretty sure she will stay. If you look at the Cheveley Park last year she was going to win nothing a hundred yards from the post and she won a length and a half going away.

“I think she will stay. She’s got plenty of stamina on the dam’s side and she is a very relaxed filly,” she said.

Aidan O’Brien has two other entries among the 17 fillies left in the 1,000 and has four colts in the mix for Saturday’s 2,000 Guineas.

His first runners since March will be when last year’s Epsom Derby hero Anthony Van Dyck, and his stable companion Broome, line up in Friday’s Coronation Cup at Newmarket.

The Ballydoyle trainer has outlined his own plans for some staff to remain in England for a number of weeks – and handle horses travelling to major cross-channel fixtures such as Ascot – rather than have to self-isolate on returning to Ireland.

Adaptability has become a byword in the face of the unprecedented Covid-19 pandemic and Harrington expressed her relief at the prospect of racing resuming in Ireland at Naas next Monday.

Harrington won’t be able to go racing herself due to Horse Racing Ireland protocols that prevent anyone aged 70 or over from attending behind closed doors fixtures.

It means quite a few other high-profile trainers won’t be able to watch their horses race, something that has provoked ire among some of them.

“If that’s what they want, and we can have racing, let’s do it,” argued Harrington who was 73 earlier this year and chose to self-isolate for 14 days after returning from the Cheltenham Festival in March.

“But really, am I old enough and bold enough to do what I want to do? I won’t. There’s a ban on it. But surely I can make up my own mind whether I want to go: if I was worried I’m sure I wouldn’t go racing.

“Somewhere along the line we’ve got to actually make up our own minds what we want to do.

“I’m not saying they’re wrong. [But] if you have an underlying medical condition you wouldn’t go [racing] anyway because it’s sensible not to.

“I’ve got a friend who is 70 in the next month. They can go [racing] now. But who’s going to know when they’re about to be 70. What is the difference a day makes?

“It is what it is. Let’s get racing up and running and don’t let’s have any hiccups,” she said.

She carried the colours of the Niarchos family and so does Albigna who will get her own shot at Classic glory on Saturday week at the Curragh.

Last year’s Prix Marcel Boussac winner is one of a very strong team of three-year-old fillies that Harrington plans to divide up in the radically revamped programme.

“The plan at the moment is the Irish Guineas for Albigna. Alpine Star is going for the Coronation Stakes [Royal Ascot] because she has the same owner.

“Valeria Messlina might run in the Irish Guineas or one of the trials, we haven’t made our minds up, and Cayenne Pepper is waiting for a mile and a quarter race,” she said.