HRI announces full jumps programme up to start of August

Three days of Galway Festival will be jumps-only 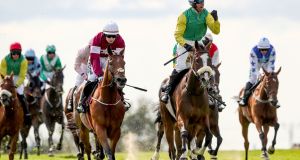 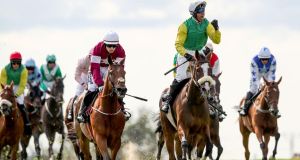 Horse Racing Ireland has published its full programme of National Hunt races for the months of June and July, as well as races scheduled for the August Bank Holiday weekend.

Racing is due to resume on June 8th behind closed doors, but no jumps fixtures are planned until June 22nd when Limerick will be in action.

HRI has ruled it will allow single-code meetings only as it looks to minimise the number of people working at the racecourse.

That ruling has forced significant changes to the usual Galway Festival programme, although the Galway Plate and Galway Hurdle will be run on the Wednesday and Thursday of the meeting as normal, with a Listed novice hurdle and a Grade Three novice chase featuring on the respective cards.

There are 24 National Hunt meetings at 12 racecourses, with the Grade Three Grimes Hurdle at Tipperary on June 26th and the Grade Three An Riocht Chase at Killarney on July 7th particular highlights.

Shane Doyle, HRI’s race-planning manager, said: “Most cards have been programmed with the possibility of a divide included to respond as effectively as possible to the demands of the horse population and give additional opportunities in the areas of highest demand.

“The quality of horses running through the summer programme, even outside the Galway Festival, continues to rise, with the likes of Ballyoisin, Darver Star, Peregrine Run and Ravenhill appearing regularly last year.

“I am sure we can look forward to some top action when National Hunt racing gets back under way.”

HRI is planning to publish the full Flat programme up to the conclusion of the Galway Festival next week.