Trainer Halford eyes up Guineas glory with Sinawann and Ridenza

Hamariyna set to reappear in the Ridgewood Pearl Stakes on Irish 1,000 Guineas day 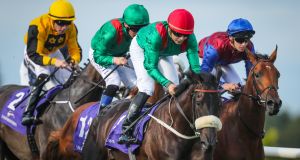 Sinawann and Ridenza are on course to bid for Classic glory in the Irish 2,000 and 1,000 Guineas respectively next month.

The Mick Halford-trained pair made a good impression in their juvenile season, with Sinawann breaking his maiden at the Curragh before taking second behind Mogul in Group Two company at Leopardstown on Irish Champions Weekend.

In the same Aga Khan colours, Ridenza was only seen once, but looked potentially exciting in her victory at Leopardstown in August.

With racing set to resume on June 8th, Halford has his sights on the Curragh later that week.

He said: “The plan is for both of them to run. They’re both in good form and I’m happy with where they are, so the plan is to run.”

The Tetrarch Stakes had been mooted as a prep run for Sinawann, but the coronavirus shutdown meant that was not possible.

Halford said: “We didn’t get a prep run, but it’s one of those years isn’t it. I’m still happy with him. He’s in a good place and we’re very pleased with him.

“Ridenza fractured a pastern the night she won, she was lame immediately after the race and had surgery the next morning. She recovered well, she’s back and has been training well.

“She’s a nice filly with a good pedigree and great attitude. I’d have been more keen to get a prep run into her, but it wasn’t to be and we’ll go as we are.

“She’s in a good place and it will be great to be back racing.”

Halford can also look forward to Hamariyna, who does have the benefit of a run this year and is set to reappear in the Ridgewood Pearl Stakes on Irish 1,000 Guineas day.

The daughter of Sea The Moon won twice from four starts during her debut campaign as a three-year-old, including the Group Three Derrinstown Stud 1,000 Guineas Trial at Leopardstown.

Carrying a penalty for her return to action in the Park Express Stakes at Naas in March, Hamariyna was one of the outsiders as a 16-1 chance, but ran a big race to split the Ger Lyons-trained pair of Lemista and odds-on favourite Even So, on what was her first outing in 271 days.

Halford said: “I was delighted with her run in Naas, with a big weight and her first run in a while. She’s training well and will probably take her chance in the Ridgewood Pearl.”

On how through things have gone for his Curragh yard through the lockdown, Halford said: “Everybody has been well and our owners have been very patient and left horses here with us.

“The staff are all in good form and the horses are working well. It’s strange times, but everybody’s spirits are up now that we have a date to aim at. We’re all anxiously waiting to get going again.

“There’s more serious things going on in life than training horses and racing horses, but it’s still very important to us and is an important industry.

“It will be great to get some action again, it’s the racing that gets all the wheels turning for everything else, like the sales and everything that goes with it. There’s plenty that will get a lift out of it.”

Away from the domestic scene, Halford was a delighted observer of the action at Sha Tin in Hong Kong on Sunday, as Exultant picked up the fifth Group One victory of his career.

Now trained by Tony Cruz, the Teofilo gelding was known as Irishcorrespondent in his time with Halford and finished third in the 2017 renewal of the Irish 2,000 Guineas won by Churchill.

Halford said: “We never miss watching him when he runs, he’s a wonderful horse. We were delighted to have him when we did and Tony Cruz has done a terrific job with him.

“I was in Hong Kong last year and Tony kindly brought me to the stables one morning and I had a nice morning with him.

“It’s terrific to see him doing so well – he’s a wonderful horse.”