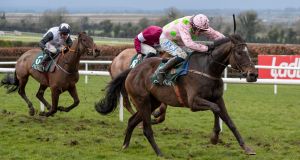 Cheltenham Gold Cup-winning rider Paul Townend went from one extreme to the other as he steered Francin to victory at a spectator-less Navan.

Fresh from being roared home by the massive Cheltenham crowd aboard Al Boum Photo on Friday, Townend was in action in front of empty stands in the county Meath venue - because mass gatherings of more than 500 people have been temporarily banned in Ireland due to the coronavirus pandemic.

A lack of support — both physically and in the market — did not stop Francin in the Irish Stallion Farms EBF Novice Hurdle though, as the Willie Mullins-trained runner powered past Sixshooter on the run-in to score by two lengths as a 4-1 chance.

Townend said: “He did it nicely. He was going to win well here the last day, but made a mistake at the last, so I was anxious to follow one down to the last.

“I was happy enough down the straight that I was going to get them. Stepping up to that trip didn’t inconvenience him — I think he needs it.

“The ground is rotten — but he galloped away through it as well as anything would, I’d say. He took a while to win. We have had him a long time, but he’s won two now and he’ll definitely keep progressing. He’s a nice horse, and I’d say chasing will be his game down the line.”

Up against prolific winner Treacysenniscorthy, Jimmil took the lead approaching the last before going on to triumph by five and a half lengths.

Cromwell said: “That was great, and it was a brilliant pot. His jumping is only starting to come. He asked him at one down the back, and he jumped up into the clouds.

“He fell here a couple of runs ago when he over-jumped, but it’s come together - and this is a great pot to win. I think there might be something in Fairyhouse for him, but we’ll see how we go.”

Jessica Harrington and Robbie Power were out of luck at Cheltenham, but returned to winning ways as Lynwood Gold (11-4) landed the Bective Restaurant Maiden Hurdle.

Power said: “That was good. He had a good run in Naas the last day — he’s improved with every run, and handles those conditions very well. He’s a good, tough horse and was a decent horse on the Flat. Two miles is far enough for him at the moment, but he will stay further.”

1 Georgia and Fiji in line to join Six Nations sides in eight-team tournament
2 Ken Early: Another Mourinho masterclass in going through the motions
3 Stephen Scullion: ‘Athletes will do long-term serious damage chasing those results’
4 Malachy Clerkin: Sleep well Jack, you made us all happy
5 The Offload: All eyes on Leinster’s academy intake
Real news has value SUBSCRIBE